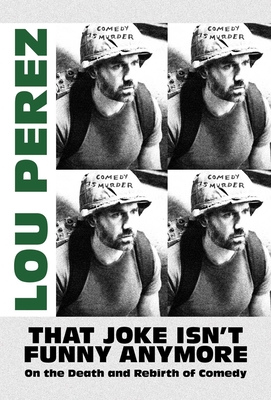 On the Death and Rebirth of Comedy

The Woke are killing comedy—and that makes being a comedian today better than ever!

The Woke—that humorless, joyless, shame-inducing virus—are killing comedy…and that is great for comedians! So argues Lou Perez in his hilarious and provocative book debut, That Joke Isn’t Funny Anymore.

Through the lens of comedy, Lou examines antiracism, sex, gender, cancel culture, and all the new sacred cows that have been propped up in recent years. An equal-opportunity offender, nothing is safe from his mockery. Lou punches up, he punches down—he’s throwing haymakers in every direction!

This book is a cancelable offense. But worth the risk. It’s time to fight back. To create, to celebrate, and most importantly, to laugh. These are amazing times. In no small part thanks to the Woke gift to comedy.

Plus, reading That Joke Isn’t Funny Anymore will take care of your diversity reading quota. Lou has the results from his DNA test to prove it.

Lou Perez was the Head Writer and Producer of the Webby Award–winning comedy channel We the Internet TV. In addition to producing sketch comedy, performing stand-up, and opinion writing, Lou also hosts The Lou Perez Podcast.

Lou began doing improv and sketch comedy as an undergrad at New York University, where he was part of the comedy group the Wicked Wicked Hammerkatz.

For years, Lou performed at the Upright Citizens Brigade Theatre in NYC and L.A., in sketch shows with the Hammerkatz, and his comedy duo, Greg and Lou. Lou was also a comedy producer on truTV’s Impractical Jokers.
Loading...
or support indie stores by buying on