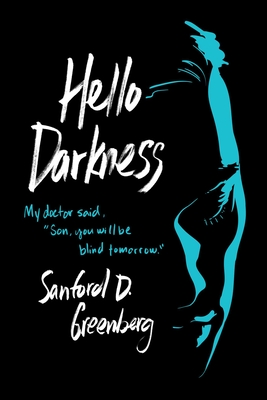 My doctor said, "Son, you will be blind tomorrow."

Hello Darkness is the true story of a young man who at the peak of his college career loses his eyesight and is plunged into total darkness. Once, Sandy Greenberg had dreamed of being a lawyer, maybe even president. Now, he’s told he must walk cautiously through life. But that’s not how this story unfolds. Love, friendship, and his own iron determination write an entirely different end to this exceptionally inspiring story.

Imagine you are back home from college. It’s a beautiful summer evening, and you’re pitching in a baseball game when suddenly you can’t see the batter, your catcher, the mound beneath your feet. Sandy Greenberg recovered from that moment, but six months later, in the middle of a final exam, he went blind for good, and forevermore.

A junior at Columbia University on a full scholarship, Sandy had just started to see the world open up to him. But instead of his plans for a bright future, he now faces a new reality, one defined by a cane, a companion dog, jobs limited to his blindness.

In the depth of his new darkness, Sandy faces a choice—to play it “safe” or return to Columbia to pursue his dreams. With the loving devotion of his girlfriend (and now wife) Sue and the selflessness of his best friend, Art Garfunkel, and through his own unyielding determination, Sandy breaks the chains of blindness, graduates as president of his class, and forges a life of exceptional achievement.

The message of this book is simple: Sandy did it, and you can, too. Or put even more directly: Never give up.

Blinded at nineteen, Sanford D. Greenberg graduated from Columbia University (Phi Beta Kappa) and, following a Marshall Scholarship at Oxford, received his M.A. and Ph.D. at Harvard and M.B.A. at Columbia. He was a White House Fellow under Lyndon B. Johnson and later chaired the federal Rural Healthcare Corporation and served on the National Science Board. His career as an entrepreneur and investor began when he invented, of necessity, a speech-compression machine for those who need to listen and absorb large volumes of printed matter. He subsequently founded several enterprises, including a company that produced specialized computer simulators and the first database tracking antibiotic resistance globally. A Johns Hopkins University and Medicine Trustee Emeritus, Sandy is chairman of the Board of Governors of its Wilmer Eye Institute and founder, along with his wife, Sue, of the Sanford and Susan Greenberg Center to End Blindness at the Johns Hopkins Wilmer Eye Institute, the only facility in the world devoted solely to ending blindness for everyone, forevermore. In a December 2020 ceremony streamed worldwide, Sandy and Sue awarded the initial Greenberg Prizes: $3 million in aggregate to those researchers who have made the greatest progress toward ending blindness for all mankind.
Loading...
or support indie stores by buying on