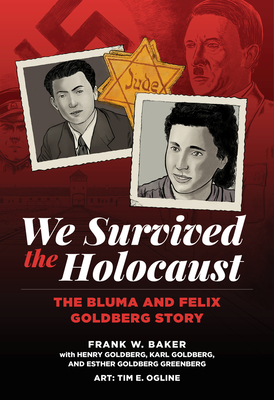 We Survived the Holocaust

The Bluma and Felix Goldberg Story

During Adolf Hitler’s rule over Germany, there were over 40,000 Nazi concentration, labor, and death camps built with the intent of erasing an entire population of Jews, Sinti, and Roma, as well as “other examples of impure races.” Bluma Tishgarten and Felix Goldberg were both young Polish Jews caught up in the Holocaust, Hitler’s rise to power, the rise of antisemitism, and more. Yet they survived. Bluma and Felix’s miraculous story of survival, combined with the rise of nationalism and fascism, leading to the extermination of millions of human beings, is also a cautionary tale—a dangerous history that, if we do not heed the warning signs, could very well be repeated.


Praise For We Survived the Holocaust: The Bluma and Felix Goldberg Story…

"I cannot think of a more powerful way for the Goldberg's story to be told than through the graphic novel, We Survived the Holocaust – The Bluma and Felix Goldberg Story. I highly recommend this title to readers from young adults – adults. As a former school librarian and current educator of school librarians, I hope that this title will be on the shelves of all middle and high school libraries. The stories of how the Goldbergs, and other Jews, survived the Holocaust should never be forgotten by current and future generations." —Karen Gavigan Ph.D., Professor and Interim Director, College of Information and Communications. University of South Carolina

"The story of Bluma and Felix Goldberg successfully walks that fine line, capturing the human experience while also doing justice to the scale and monstrosity of the Holocaust, yet without resorting to horrific imagery... If any graphic novel has ever captured the profound love that so many survivors felt for their adopted homeland, this is it. Tim Ogline’s detailed maps and landscapes help to create a true work of art." —Doyle Stevick Ph.D., Executive Director, The Anne Frank Center University of North Carolina

"This graphic novel will engage readers of all ages as they encounter the terrors of the past with fresh eyes. With the scourge of intolerance, hate and anti-Semitism still present in daily life, we must continue to share survivor stories with the next generation." —Renee Hobbs, Media Education Lab University of Rhode Island USA

"The Goldberg story is the American story. Despite all of our obvious problems, it is still a blessed story of inclusion, hope and accomplishment--two people who somehow survived the horrors of the Holocaust to find another life in another land. I highly recommend this heartwarming book." —Marvin Kalb, former CBS/NBC correspondent, Author of the widely acclaimed Assignment Russia

“We Survived the Holocaust makes the story of Bluma and Felix Goldberg come alive for a new generation of readers...Whether you are a classroom teacher wanting to teach the Holocaust or a fan of graphic novels, you will want to have this book in your collection. You won’t be able to put it down. Nor should you.” —William Kist, Professor Emeritus, Kent State University

"We are fast losing the generation that lived thorough the Holocaust, making it more crucial than ever to document their horrific experiences for future generations. The survivors have been in our midst, but often we didn’t know the trials and bravery that brought them to our communities. In creating We Survived the Holocaust as a graphic novel, Frank Baker engages in a story unsparing in its stark detail, without ever overwhelming the unshakable humanity and hope of Bluma and Felix Goldberg.” —David Kleeman, Children and Media Analyst

"Poignant, timely, engaging, scary, thoughtful, necessary. Necessary. Today, history is being challenged, manipulated, changed or denied to fit the political winds... I taught history for 31 years and I wish I had this graphic novel as a resource when I taught the history of the Holocaust. Teachers and their students need this book. This history has to be taught. " —Perry McLeod, Google Certified Teacher, Apple Distinguished Educator, National Board Certification, Fulbright Scholar/Germany

"There are many ways that contemporary students learn, different paths by which they can engage with the complexities of history, much especially a history as difficult and painful as the history of the Holocaust...It speaks to some of the most important of our values and offers a message that is at once timeless, but so timely in the world of war, antisemitism and racism that has characterized 2022. Simply but not simplistically told and beautifully illustrated, the complex story of the Goldbergs is now accessible to readers of all ages, and even to those who don’t like to read!" —Michael Berenbaum, Distinguished Professor of Jewish Studies, Director of the Sigi Ziering Institute: Exploring the Ethical and Religious Implications of the Holocaust, American Jewish University, Los Angeles CA, USA

"The graphic style of We Survived the Holocaust reminds me of both Maus and those rare drawings secretly made by the concentration camp prisoners to preserve the memory of what happened to them. This book is for 21st century young readers for whom words are not enough to bring the horrors of the Holocaust to life." —Michael Bazyler, Holocaust legal scholar, Chapman University, author of the award-winning Holocaust, Genocide and the Law: A Quest for Justice in a Post-Holocaust World

Frank W. Baker is an internationally recognized media literacy educator. He maintains the Media Literacy Clearinghouse and Close Reading The Media websites. His lifelong work in media literacy was recognized in 2019 by UNESCO. He is the author of “Close Reading The Media” and “Media Literacy in the K-12 Classroom.” To learn more, go to www.frankwbaker.com
Loading...
or support indie stores by buying on