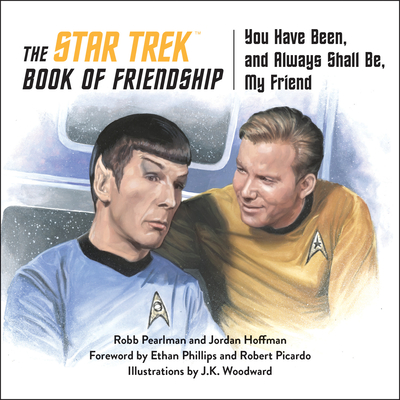 The Star Trek Book of Friendship

You Have Been, and Always Shall Be, My Friend

Star Trek has energized friendships for over 50 years. Whether it’s exploring a convention, beaming into a movie theater, or joining in on a landing party watch party, generations have been as united in their love of the franchise’s bold storytelling and stunning action as they are in the honest fully realized relationships of their favorite characters.

Created by fans for fans, with a foreword from Star Trek: Voyager’s Robert Picardo and Ethan Phillips, this is a first-of- its-kind, fully authorized celebration of Star Trek’s most enduring and endearing friendships, including Kirk and Spock, Picard and Data, Janeway and Seven of Nine, Bashir and Garak, and more!

Whether you and your pals think of yourselves as a Sulu and Chekov, a Burnham and Tilly, or even an Archer and Porthos, this is the perfect book to gift to your best Trek friend or keep for yourself! A portion of the proceeds from the sale of this book goes to benefit The Planetary Society, a nonprofit dedicated to empowering the world’s citizens to advance space science and exploration.

Robb Pearlman is a pop culturalist and New York Times author of over 40 books for adults and children, including seven Star Trek books. He is a frequent guest and speaker at Star Trek and pop culture conventions.

Jordan Hoffman is an entertainment journalist whose work can be read in Vanity Fair, The Guardian, The New York Times, New York Daily News, Los Angeles Times, and New York Magazine. He penned 100 “One Trek Mind” columns for startrek.com, hosted “Engage: The Official Star Trek Podcast” for two years, and has moderated at Star Trek conventions across the world.


J.K. Woodward has worked as a comic book artist for over 30 years and is best known for illustrating IDW’s Star Trek comics and graphic novels.
Loading...
or support indie stores by buying on