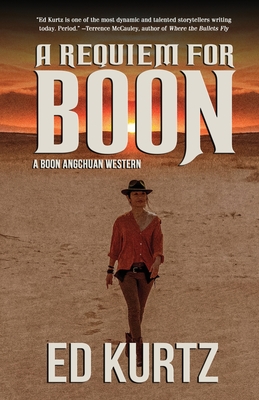 A Requiem for Boon

-but not before she finally finishes her bloody quest.

Edward Splettstoesser and Liliana Contreras have been on the trail together for the better part of a decade, searching for their long-lost friend Boon. After so many dusty miles and bitter disappointments, they finally track her down to a Wyoming prison and begin hatching plans to break her out. But all hell breaks loose, and in the middle of the pandemonium is "the Frenchman," one Emile Champlain, who may very well hold the long-sought secret of what truly happened to Boon's mother, Pimchan.

The chase is on, from the Wyoming State Prison to a hellish confrontation at a cattle ranch, ultimately leading them to the frozen, far-flung Alaskan and Western Canadian wildernesses in the throes of the Gold Rush. There, Champlain holds court over his ill-gotten fiefdom and awaits the final showdown with the wildest woman in the west.

The explosive conclusion to the Boon Trilogy, A Requiem for Boon is her biggest, bloodiest, and most consequential adventure yet, where the fates of her and her dearest friends all hang precariously in the balance.