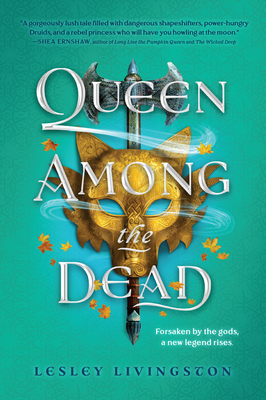 Queen Among the Dead

“Queen Among the Dead is bright, authentic and spellbinding. The story takes place in a kingdom where magic is outlawed and druids hoard and misuse magic. When Eire is threatened, an outlaw and a princess team up to secure a safer future.”
— Kahill Perkins, Raven Book Store, Lawrence, KS
View the List

A stunning Celtic YA fantasy adventure set in the ancient kingdom of Eire, inspired by the legend of the first true queen of Ireland, perfect for fans of Shelby Mahurin and Adrienne Young.

In the kingdom of Eire, banshees chill the air, and water-wights lurk in the rivers. But magic is outlawed by the king, and jealously hoarded by his Druid priests.

Neve is the youngest daughter of the king, and Ronan is a Druid's apprentice turned thief, making a living by selling stolen spells. They should be enemies, but their shared hatred of the Druids--and a dark magic that has marked them both--makes them unlikely, if uneasy, allies.

When Eire is threatened by a power struggle, Neve must seize the chance to take her rightful place on her family's throne, with the help of Ronan and the realm's most dangerous outcasts. Their journey takes them to the outskirts of Eire, where magic still runs free . . . and where an outlaw and a warrior princess might carve out a future with spells and swords.

Lesley Livingston vividly reimagines Irish legends and fairytales to craft a YA fantasy adventure that will captivate readers of Brigid Kemmerer and Tricia Levenseller.