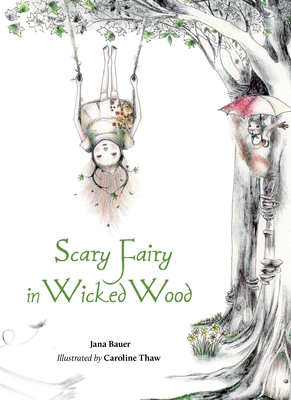 When Scary Fairy causes a ruckus in Wicked Wood, will she change it forever?

Scary Fairy blows into Wicked Wood on a fierce Southern Wind and immediately begins disturbing the peace. She discards Squirrel's acorns to make her new bedroom. She uses Hedgehog as a hair brush without even asking And this is just the beginning. When diaries go missing and magical black sand appears, the animals of Wicked Wood fear their home will never be the same. But as they get to know Scary Fairy, they realize she is more than just trouble. Will all of her disruptions ruin Wicked Wood, or is this just the change the animals need? Follow their adventures through new experiences and perspectives in this charming chapter book. Originally published in Slovenia by Sodobnost, and now translated in nearly 20 languages, the English translation of the international award-winning Scary Fairy in Wicked Wood is finally landing in North America. This enchanting, funny, whimsical, witty collection of stories feels both as timeless as Wind in the Willows and as fresh as the springtime season in which Scary Fairy arrives in the Wood. Filled with perfectly imperfect characters, mistakes, forgiveness, and genuine friendship, this book is sure to delight readers of all ages.

Jana Bauer (1975) is a popular author of literature for children and teenagers. She grew up in Kočevje, Slovenia, spending every summer with her granny by the river Kolpa. Her father was a passionate storyteller and it is his legends about witches, ghosts and smugglers that had the greatest impact on the development of her imagination. With her childhood full of pleasant reveries behind her, she went to study dramaturgy at the Academy for Theatre, Radio, Film and Television (AGRFT) in Ljubljana. After graduating, she devoted her time to writing fantasy stories for children. Her debut novel The Witch Vanisher (nominated for the Večernica Prize, with the English version published in the US) was followed by a series of detective stories about Fokus and Kolumna. However, she won by far the greatest popularity among the young readers with the illustrated fairytale Scary Fairy in Wicked Wood, published in 2011 and translated so far into 17 languages, among them Icelandic, Mongolian, Turkish, Malayalam and Indonesian. It received the Golden Pear award and was nominated for both the Večernica and Desetnica Awards (2013). In German translation the audiobook Die Kleine Gruselfee became the Book of the Month (by Jury der Deutschen Akademie fur KJL), while in Croatia it was listed among recommended works for children. In Lithuania, it received the IBBY award for the best artistic translation. Most recently it received the main award at the international Macedonian literary festival (Another Story). In 2020 she received Desetnica Award from the Slovene Writers' Association for her recent book Ding Dong Stories, her writing features a blend of witty, amusing characters with compelling and gripping stories. Although her books are meant for children, their magic and originality give great pleasure to readers of all generations. Being also an editor, Jana Bauer dedicates a great deal of her time to books by other authors as well. Born in London, Caroline Thaw is a British/American illustrator who lives with her family near Edinburgh in Scotland. Caroline originally trained and worked as a Theatre Designer in the UK before specializing in illustration when she moved to NYC in 2007. Her theatrical background has strongly influenced her approach to illustration and storytelling. With a fine eye for detail, she is passionate about capturing a sense of personality & humor in her drawings. She is greatly inspired by her own children (she has 3) and the beautiful landscape which surrounds her in Scotland.
Loading...
or support indie stores by buying on