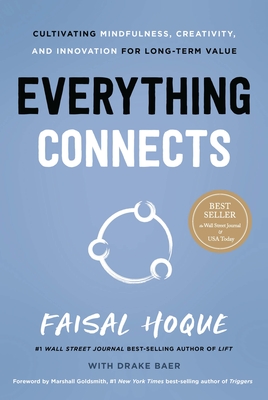 An updated edition for an ever-shifting landscape of change

​In Everything Connects, Faisal Hoque--noted thought leader; serial entrepreneur; technology innovator; advisor to CEOs, BODs, and the US federal government; and author--provides a framework that shows readers how to: - Holistically connect the "when" and "what" with who they are
- Inspire and lead inside and outside of their organization
- Generate ideas, grounded decisions, and long-term value Part philosophy, part business, and part history, this book is a kaleidoscopic view of the way humans―by being able to think out of the box―have been able to achieve greatness for themselves, their organizations, and the world at large. You'll learn from the wisdom of Eastern philosophies that are over 2,500 years old and the interconnected insights of Leonardo da Vinci. Couple that with Fortune 100 corporate cross pollination for creativity and startup thinking for how to adapt with ease, and you have Everything Connects. This isn't just a quick fix for your next financial quarter; this is how you succeed in the long run. This updated version includes new content that is inextricably connected to leveraging and thriving in this environment of change. Through the lens of the Fourth Industrial Revolution and the COVID-19 pandemic, we can see how it's essential to reframe the ways we approach how we work, play, and live. The new content adds further substance to the seminal focus of the first version of Everything Connects and furthers the core message--that everything, in fact, does have a relationship to everything else resulting in a powerful synergy.

Faisal Hoque is an accomplished entrepreneur, senior executive, author, thought leader, public speaker, and advisor to management teams and BODs with more than 25 years of cross-industry success. He is the founder of SHADOKA, NextChapter, and other companies. They focus on enabling sustainable and transformational changes. Throughout his career, he has developed over 20 commercial business and technology platforms and worked with public and private sector giants such as US Department of Defense (DoD), GE, MasterCard, American Express, Northrop Grumman, CACI, PepsiCo, IBM, Home Depot, Netscape, Infosys, French Social Security Services, Gartner, Cambridge Technology Partners, JP Morgan Chase, CSC, and others. What sets Faisal apart is the unique position and perspective he has always maintained, which is grounded in hardcore technology with deep roots in leading-edge management science. As a thought leader, he has authored a number of books on leadership, innovation, mindfulness, resilience, organizational transformation, and entrepreneurship, including Everything Connects - How to Transform and Lead in the Age of Creativity, Innovation and Sustainability . His work has appeared in Fast Company, Business Insider, Wall Street Journal, BusinessWeek, Fox, CBS, Financial Times, Mergers & Acquisitions, Forbes, Leadership Excellence, and Huffington Post among other publications. American Management Association (AMA) named him one of the Leaders to Watch. The editors of Ziff-Davis Enterprise named him one of the Top 100 Most Influential People in Technology alongside leading entrepreneurs such as Steve Jobs, Bill Gates, Michael Dell, Larry Page, and others. Trust Across America-Trust Around the World (TAA-TWA) named him one of the Top 100 Thought Leaders alongside global leaders such as Bill George, Doug Conant, Howard Schultz, and others. His broad areas of expertise include innovation, leadership, management, sustainable growth, transformation, strategy, governance, M&A, frameworks, and digital platforms. A lifetime student of Eastern philosophies, he holds a strong belief that it is through knowledge sharing of our experiences that we may provide the greatest clarity on how to improve our collective future. As a globetrotter, he is passionate about people, culture, food, architecture, and loves to cook. For more info, visit www.faisalhoque.com or follow him on Twitter @faisal_hoque and on LinkedIn - www.linkedin.com/in/faisalhoque/. Drake Baer is Insider's first editor at large, working across the newsroom to help produce ambitious journalism. For two and a half years before that, Baer served as deputy editor, overseeing a team of twenty-plus reporters and editors who cover the future of work, real estate, and small business. The fast-paced team was behind some of Insider's major packages in the last few years, including a state-by-state look into unemployment during the first year of the pandemic and in-depth profiles of "niche famous" characters such as real estate media tycoon Brandon Turner and HR icon Johnny C Taylor. They shed new light on big names, like Joe Biden, America's imperfect leader. He also cultivated thesis-oriented ideas journalism, whether it be on why "'diversity' and 'inclusion' are the emptiest words in corporate America" or why it's actually a horrible time to buy a house. (No, really, it is.) Before editing, his byline as a reporter was on the masthead for Fast Company and New York Magazine, covering the many intersections of social science, business, and economics. Baer has interviewed some our time's leading minds, including philanthropist Bill Gates, FiveThirtyEight founder Nate Silver, NBA champion and investor Steph Curry, "growth mindset" psychologist Carol Dweck, the rapper Q-Tip, Nobel laureate Daniel Kahneman, and the man who gave a name to "disruptive innovation," the late Clay Christensen. Baer has published two books, the most recent being Perception: How Our Bodies Shape Our Minds, with Dennis Proffitt. He has been featured as a speaker at the Aspen Ideas Festival, presented at TedX Princeton, and moderated many panels. Fun facts? He's meditated every day for over a decade, except for the days he hasn't. He circumnavigated the globe before turning twenty-five. He loves and can advocate for just about every food except grapefruit. And at thirty-five, he is just now learning to draw.
Loading...
or support indie stores by buying on