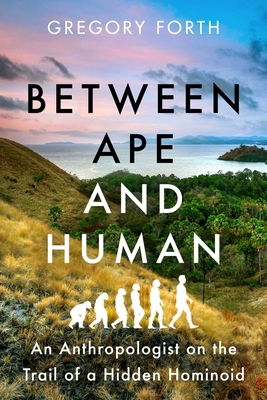 Between Ape and Human

An Anthropologist on the Trail of a Hidden Hominoid

A remarkable investigation into the hominoids of Flores Island, their place on the evolutionary spectrum—and whether or not they still survive.

While doing fieldwork on the remote Indonesian island of Flores, anthropologist Gregory Forth came across people talking about half-apelike, half-humanlike creatures that once lived in a cave on the slopes of a nearby volcano. Over the years he continued to record what locals had to say about these mystery hominoids while searching for ways to explain them as imaginary symbols of the wild or other cultural representations.

Then along came the ‘hobbit’. In 2003, several skeletons of a small-statured early human species alongside stone tools and animal remains were excavated in a cave in western Flores. Named Homo floresiensis, this ancient hominin was initially believed to have lived until as recently as 12,000 years ago—possibly overlapping with the appearance of Homo sapiens on Flores. In view of this timing and the striking resemblance of floresiensis to the mystery creatures described by the islanders, Forth began to think about the creatures as possibly reflecting a real species, either now extinct but retained in ‘cultural memory’ or even still surviving.

He began to investigate reports from the Lio region of the island where locals described 'ape-men' as still living. Dozens claimed to have even seen them.

In Between Ape and Human, we follow Forth on the trail of this mystery hominoid, and the space they occupy in islanders’ culture as both natural creatures and as supernatural beings.  In a narrative filled with adventure, Lio culture and language, zoology and natural history, Forth comes to a startling and controversial conclusion.

Unique, important, and thought-provoking, this book will appeal to anyone interested in human evolution, the survival of species (including our own) and how humans might relate to ‘not-quite-human’ animals. Between Ape and Human is essential reading for all those interested in cryptozoology, and it is the only firsthand investigation by a leading anthropologist into the possible survival of a primitive species of human into recent times—and its coexistence with modern humans.

Praise For Between Ape and Human: An Anthropologist on the Trail of a Hidden Hominoid…

"Mr. Forth is a highly reputable scholar, a scrupulous researcher, as well as an effective communicator....[In Between Ape and Human] Mr. Forth recounts much that is suggestive and intriguing, deep diving into Lio beliefs about the lai ho’a in myth, legend, religion, and rumor."

"Between Ape and Human is fascinating reading for someone who understands that, while archeology trades in materials science and in firm estimates of dates and purpose, anthropology is about conversations and culture...[Forth] presents a record of the puzzling information that he collected and then sets out the anthropologist’s own ideas about whether the modern-day Flores hobbits descend directly from the ancient ones. If you’re in the mood for an adventure, you might want to read the book."
— Forbes Magazine

“Well-written and entertaining.  Between Ape and Human tells not just the story of Homo floresiensis.  It tells a story of how we perceive nature and how people deal with the unknown.  It is as much about the science of our human relatives as it is about human nature and how we view the world.  Forth compellingly grapples with how to interpret these observations and what they mean in the real world.”
— Rob DeSalle, American Museum of Natural History, author of A Natural History of Color

Gregory Forth received his doctorate at Oxford and was a professor of Anthropology at the University of Alberta for more than three decades.  He is a fellow of the Royal Society of Canada and is the author more than one hundred scholarly papers and several academic books.  This is his first book for a general audience.
Loading...
or support indie stores by buying on