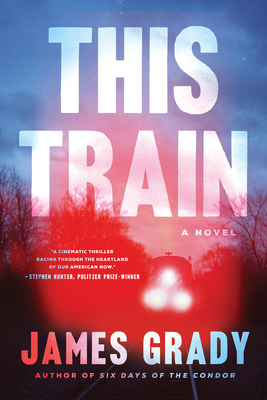 The new novel from the acclaimed author of Six Days of the Condor—set on a heart-pounding cross-country train ride.

"Grady is a master of intrigue."—John Grisham

This Train races us through America's heartland, carrying secrets. There is treasure in the cargo car, along with an invisible puppeteer. There is a coder named Nora, Mugzy, the yippy dog, and Ross, the too-curious poet.  On board, it's a countdown to murder…

On this train there is a silver madman, a targeted banker, and crises of conscience. This train harbors the "perfect" couple's conspiracies, the chaos of being a teenager, and parenthood alongside the wows of being nine. There is a widow and a wannabe, and the sleaziest billionaire.

On this train, there is the suicide ticket, the bomb, sex, love, and loneliness.  The heist. Revenge. Redemption.

This Train is a ticking clock, roaring through forty-seven fictional hours of non-stop suspense and action, through the challenges of now: Racism. Sexism. Global warming. What it means to be alive.

This train carries all of us. All aboard!

Praise For This Train: A Novel…

“A cross-section of American types—visualize an updated version of Chaucer’s Canterbury pilgrims—whose actions, often enigmatic and ominously unsettling, are relayed in fast-moving, syncopated prose, each sentence like a knife-thrust.  It is a truth universally acknowledged that suspense novels set on trains can’t help be anything other than terrific."
— Michael Dirda

"A cinematic thriller racing through the heartland of our American now."
— Stephen Hunter, Pulitzer Prize-winner

“Brilliant! A novel of soaring imagination, This Train delivers a kaleidoscope of riveting characters and roller coasters of hurtling plots. The book’s nonstop pages redefine crime fiction, and author Grady captivates us further by telling the story in a voice that is so rich, resonant and poetic that it veritably sings. Bravo!”
— Jeffery Deaver, Mystery Writers of America Grand Master, author of The Bone Collector and The Midnight Lock

"Writing with the rhythm of a rushing train, James Grady delivers a story you won't see coming, crowded with characters you get to know very well very fast. If ever a book paralleled the experience it depicts, This Train is that book."
— SJ Rozan, best-selling author of FAMILY BUSINESS

"This Train reads like a runaway locomotive with a one-track mind. James Grady delivers this masterful thriller at full throttle."
— Craig Johnson, author of the Longmire novels and TV series

"James Grady is a long-established master of the thriller, and he proves it here. Grab your hat, and don't let the strong wind of suspense blow it off. Highly recommended."
— Joe R. Lansdale, winner of 11 Bram Stoker awards, and an MWA Best Novel Edgar award

"James Grady is a master storyteller. Allow me to crib a line from the old gospel tune by way of Sister Rosetta Tharpe, Woody Guthrie, and Bruce Springsteen: This Train is bound for glory. It’s a pure gem.”
— William Boyle, author of A Friend Is a Gift You Give Yourself and Shoot the Moonlight Out

"The term 'master storyteller' is bandied about quite often these days, but in the case of James Grady it isn't just a marketing phrase.  This Train confirms what most readers have known for decades.  James Grady is a writer who is always at the top of his game. A nail biting thriller that will have readers on the edge of their seats. Not to be missed."
— S.A. Cosby, NYT bestselling author of Razorblade Tears and Blacktop Wasteland

“The author of Six Days of the Condor brings his keen eye for character detail and plot construction to this.  Shifting points of view, unanswered questions, and tantalizing hints of truths yet to be revealed make this an absolutely compelling read.  Best of all, Grady delivers one hell of an ending.”
— Booklist

James Grady’s first novel Six Days Of The Condor became the classic Robert Redford movie Three Days Of The Condor and the current Max Irons TV series Condor.  Grady has received Italy’s Raymond Chandler Medal, France’s Grand Prix Du Roman Noir and Japan’s Baka-Misu literature award, two Regardie's magazine short story awards, and been a Mystery Writers of America Edgar finalist.  He's published more than a dozen novels and three times that many short stories, been a muckraker journalist and a scriptwriter for film and television. In 2008, London’s Daily Telegraph named Grady as one of “50 crime writers to read before you die.”  In 2015, The Washington Post compared his prose to George Orwell and Bob Dylan.