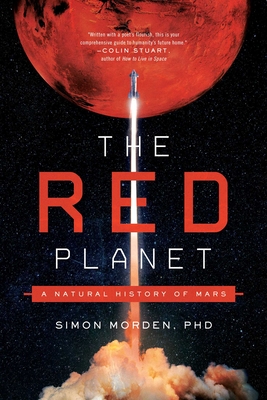 A Natural History of Mars

Uncover the mysteries, wonders, and history of Mars—as close to an eye-witness perspective of the incredible Red Planet as any reader can get.

The history of Mars is drawn not just on its surface, but also down into its broken bedrock and up into its frigid air. Most of all, it stretches back into deep time, where the trackways of the past have been obliterated and there is no discernible trace of where they started from or how they travelled, only where they ended up.

From the planet’s formation 4.5 billion years ago, through eras that featured cataclysmic meteor strikes, explosive volcanoes and a vast ocean that spanned the entire upper hemisphere, to the long, frozen ages that saw its atmosphere steadily thinning and leaking away into space, planetary geologist Dr. Simon Morden presents a tantalizing vision of our nearest neighbour, its dramatic history, and astonishing present.

Praise For The Red Planet: A Natural History of Mars…

Advance praise for The Red Planet

"The book is as captivating as any sci-fi novel, and it’s reliable and enthralling in its descriptions of Mars’ geology and history...Morden expertly sets the reader to imagining. All told, The Red Planet reads like a vastly entertaining Michelin’s written by a guide who knows so much about science that he can explain anything to anyone."
— Rebecca Coffey, Forbes

"Highly recommended for anyone wanting to learn more about Mars. It will also appeal to those with an interest in the solar system and/or geology."
— Library Journal

"The Red Planet, a geological and historical survey of our solar system neighbor, reads like a compelling travel guide. Simon Morden, an award-winning science-fiction writer with a doctorate in geophysics, embraces both these backgrounds with gusto...this is space writing at its finest, laying out extraterrestrial mysteries and convincing us to care."
— Maddie Bender, Scientific American

"Morden's writing style is friendly and accessible, and his excitement for the subject shines through. It's impressive how much information he packs into a narrative that flows so easily. The Red Planet is an excellent overview and an easy recommendation for space buffs, geologists, or anyone with a general interest in science."
— Booklist

"Vividly describes the current thinking on the natural forces and huge upheavals that shaped the planet over 4.5 billion years. Morden’s writings bring the subject to life. An excellent read. Highly recommended to those interested in knowing more about the fascinating natural history of our near-neighbour Mars.”
— Popular Astronomy

“The writing is noticeably more stylish than normally found in popular science books. An engaging and well-researched book."
— The Fortean Times

"The writing is a triumph, and the descriptions make you think that you’re on Mars already. A stunning vision of what it would be like to walk upon Mars or to navigate its dried up seas and rivers."
— Bookmunch

"As befits a work about a planet named after the God of War, this is a book of titanic clashing elements, stupendous impacts, cataclysmic eruptions, devastating forces, planet-wrenching seisms. Real heavy metal. You’ll never look at that red dot in the sky the same way again."
— Ian McDonald, author of Luna: Moon Rising

"Written with a poet’s flourish, this is your comprehensive guide to humanity’s future home.”
— Colin Stuart, author of How to Live in Space

"Full of intrigue, like a beautifully narrated adventure detective story that left a satisfying thirst of wanting to know more."
— Professor Lucy Rogers, author of It's Only Rocket Science

Dr. Simon Morden trained as a planetary geologist and geophysicist, realized he was never going to get into space, so decided to write about it instead. His award-winning writing career blends narrative science, science fiction, fantasy, and horror. He is a past winner of the Philip K. Dick Memorial Award for his Metrozone series of novels set in post-apocalyptic London. He lives in England.
Loading...
or support indie stores by buying on