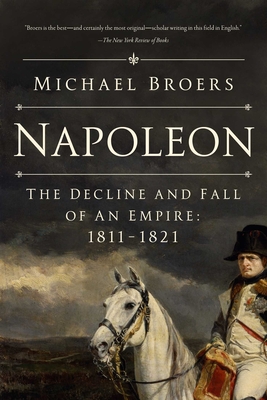 An accomplished Oxford scholar delivers a dynamic new history covering the last chapter of the emperor's life—from his defeat in Russia and the drama of Waterloo to his final exile—as the world Napoleon has created begins to crumble around him.

In 1811, Napoleon stood at his zenith. He had defeated all his continental rivals, come to an entente with Russia, and his blockade of Britain seemed, at long last, to be a success. The emperor had an heir on the way with his new wife, Marie-Louise, the young daughter of the Emperor of Austria. His personal life, too, was calm and secure for the first time in many years. It was a moment of unprecedented peace and hope, built on the foundations of emphatic military victories.

But in less than two years, all of this was in peril. In four years, it was gone, swept away by the tides of war against the most powerful alliance in European history. The rest of his life was passed on a barren island. This is not a story any novelist could create; it is reality as epic.

Napoleon: The Decline and Fall of an Empire traces this story through the dramatic narrative of the years 1811-1821 and explores the ever-bloodier conflicts, the disintegration and reforging of the bonds among the Bonaparte family, and the serpentine diplomacy that shaped the fate of Europe. At the heart of the story is Napoleon’s own sense of history, the tensions in his own character, and the shared vision of a family dynasty to rule Europe.

Drawing on the remarkable resource of the new edition of Napoleon’s personal correspondence produced by the Fondation Napoleon in Paris, Michael Broers dynamic new history follows Napoleon’s thoughts and feelings, his hopes and ambitions, as he fought to preserve the world he had created. Much of this turns on his relationship with Tsar Alexander of Russia, in so many respects his alter ego, and eventual nemesis. His inability to understand this complex man, the only person with the power to destroy him, is key to tracing the roots of his disastrous decision to invade Russia—and his inability to face diplomatic and military reality thereafter.

Even his defeat in Russia was not the end. The last years of the Napoleonic Empire reveal its innate strength, but it now faced hopeless odds. The last phase of the Napoleonic Wars saw the convergence of the most powerful of forces in European history to date: Russian manpower and British money. The sheer determination of Tsar Alexander and the British to bring Napoleon down is a story of compromise and sacrifice. The horrors and heroism of war are omnipresent in these years, from Lisbon to Moscow, in the life of the common solider. The core of this new book reveals how these men pushed Napoleon back from Moscow to St Helena.

Among this generation, there was no more remarkable persona than Napoleon. His defeat forged his myth—as well as his living tomb on St Helena. The audacious enterprise of the 100 Days, reaching its crescendo at the Battle of Waterloo, marked the spectacular end of an unprecedented public life. From the ruins of a life—and an empire—came a new continent and a legend that haunts Europe still.

"[A] vivid and analytical biography of the emperor that would appeal to his many disciples. This volume provides a rigorous analysis of [Napoleon's] demise. Broers is excellent on war, describing battles in broad brushstrokes while drawing on memoirs to add colour and immediacy to the text."
— Times Literary Supplement

"Broers is doubly gifted as a storyteller, master of the telling detail as well as of the larger currents sweeping across that part of the world that both helped and hindered Napoleon. It is in this volume, of course, that Napoleon’s world falls apart and sees him exiled to St. Helena. It is a measure of the author’s skill that the reader feels a twinge of regret for the delusional despot and his last days on a barren rock."
— Air Mail

“'Extraordinary times produced an extraordinary man,' Michael Broers writes in the third and final volume of his extraordinary biography of Napoleon Bonaparte. Mr. Broers’s trilogy is well-planned and skillfully executed. Like its subject’s character, the story it tells is both engrossing and appalling."

"Broers continues his run of satisfying books on Napoleon...An outstanding addition to the groaning bookshelves on one of the world’s most recognizable leaders."
— Kirkus Reviews, starred review

Praise for Michael Broers’s Napoleon: The Spirit of the Age:

“The great strength of Broers’s book arises from its detail, empathy, and even-handedness. He presents his information clearly and sometimes even lyrically. This is a serious work, the product of reflection as well as research befitting a distinguished professor of Western European History at Oxford.”
— Michael Dirda

"The finest biography of Napoleon ever written. A wonderful amalgam of deep knowledge, elegant prose and compelling argument.”
— The Daily Telegraph

"The scholarship is impressive, the narrative has the pace and panache appropriate to the subject, and there is much that is new, particularly when Broers probes behind the glitzy façade of Bonaparte's empire.”
— The Times (London)

Michael Broers is a Professor of Western European History at Oxford University. He is the author of The Napoleonic Empire in Italy, winner of the Grand Prix Napoleon Prize, and Napoleon: Soldier of Destiny and Napoleon: The Spirit of the Age, both available from Pegasus Books. He lives in Oxford, England.
Loading...
or support indie stores by buying on