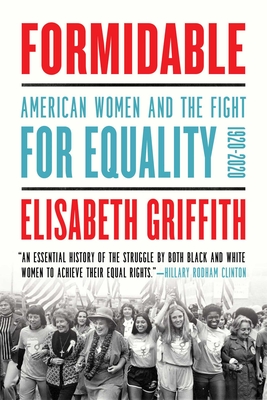 "In Formidable, Elisabeth Griffith relates how American women have approached political activism in the last century. The interplay between racism and sexism, Griffith argues, has also always been central to women’s fight for equality, even before the term “intersectionality” was coined. The women’s movement is a flawed, complex entity that will continue to boost American women far into the future, argues Formidable, an overview of the diversity of American women and their role in political history."
— Foreword Reviews

Historian and women’s-rights activist Griffith (In Her Own Right, 1984) provides an engrossing, extremely detailed survey of the rights women have both gained and lost from 1920 to 2020. This well-researched tome opens with the suffrage movement and runs through the civil-rights era to modern movements such as #MeToo. Women’s rights are examined decade by decade through a myriad of lenses, including political movements, pop-culture representation, civil rights, war, economics, and health care. The formation of united fronts in pursuit of change is delved into, as is the fragmentation of movements as various avenues and causes are pursued, sometimes putting activists at odds. Women of all walks of life and of every race and culture—whether Black, white, Hispanic, Asian, Native American, Jewish, lesbian, working class, or upper class—are examined and extolled in the long fight for women’s rights in America. This is a perfect text for feminists, activists, and readers of history and sociology.
— Booklist

Elisabeth Griffith earned her PhD from The American University and an undergraduate degree from Wellesley College.  She has been a Kennedy Fellow at Harvard’s Institute of Politics and a Klingenstein Fellow at Columbia Teachers College. Dr. Griffith has spent her career working for women’s rights as an activist and an academic, teaching women’s history at the secondary and college level and has written forThe New York Times, The Washington Post, and professional journals.  She is currently teaching courses in women’s history at the Smithsonian Associates and Politics & Prose. She is the author of In Her Own Right: The Life of Elizabeth Cady Stanton, which was the inspiration for Ken Burns’ PBS documentary, Not For Ourselves Alone.
Loading...
or
Not Currently Available for Direct Purchase