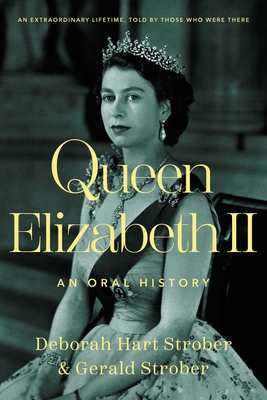 A stunning and revelatory oral history of Queen Elizabeth II and her reign.

There seems an unquenchable fascination with the British royal family on both sides of the Atlantic, borne out by the popularity of The Crown on Netflix, the spotlight on the Sussexes and Cambridges, and the media attention on the death of Prince Philip.

These detailed interviews and insightful accounts range from the very early years of her reign to Prince Phillip’s death in 2021. Covering the shocking death of her father and the adjustment required of a newly married couple as well as the turmoil of the later years and her grandchildren’s families.

This lavishly produced hardback with rarely seen color photos paints a full, detailed and sympathetic portrait of a life lived in service.

Featuring interviews from diverse sources from private staff at Buckingham Palace and family friends, to international figures like Nelson Mandela, it contains a broad spectrum of views on Queen Elizabeth II—her story and her personality and how her life has intersected and impacted others.

"The book, by Deborah Hart Strober and Gerald S. Strober (who've also written oral histories of President Kennedy and the Dalai Lama, among others) looks at the incredible work the Queen has done, but also examines the woman behind the crown and how her personality has changed the course of her country for good."
— Town & Country

"A highly detailed royal portrait for devotees of The Crown."
— Kirkus Reviews

“A terrific book. It makes for an immediacy you don’t get in the usual biography. There are things there I’ve never read before.”
— Tina Jordan, NBC

“The Strobers achieve a rare blend of the gossipy and the political. Deliciously informative and always entertaining, this is a book for thinking people.”
— Publishers Weekly

“Is just as carefully timed as Royal by Robert Lacey but it offers more satisfying illumination. An assiduously compiled narrative of the Queen’s reign.”
— The Observer

Deborah Hart Strober and Gerald S. Strober are the co-authors of ten books to date, including oral histories of the Kennedy, Nixon, and Reagan presidencies; and oral biographies of His Holiness the Dalai Lama; the evangelist Billy Graham; and Rudolph Giuliani. In compiling these works, the Strobers managed to penetrate the inner worlds of more than 500 leading personalities, including U.S. political figures and officials, foreign leaders, members of the British royal family, and religious personalities. In 2009, their book on Bernard L. Madoff, the first one to be published on that major financial scandal, was a Washington Post's Business Book of the Month.
Loading...
or support indie stores by buying on