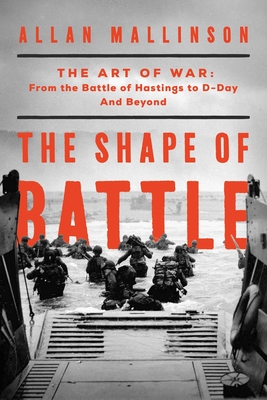 The Shape of Battle

Every battle is different. Each takes place in a different context—the war, the campaign, the weapons. However, battles across the centuries, whether fought with spears and swords or advanced technology, have much in common. Fighting is, after all, an intensely human affair; human nature doesn't change. So why were certain battles fought as they were? What gave them their shape? Why did they go as they did: victory for one side, defeat for the other?

In exploring six significant feats of arms—the war and campaign in which they each occurred, and the factors that determined their precise form and course—The Shape of Battle answers these fundamental questions about the waging of war.

Eschewing polemics, The Shape of Battle  doesn't try to argue a case. It lets the narratives—the battles—speak for themselves.

Praise For The Shape of Battle: The Art of War from the Battle of Hastings to D-Day and Beyond…

Praise for The Making of the British Army:

"A compelling history.”
— The Financial Times

"A romantic history that stirs the blood. It is hard to see this book being bettered in the near future.”
— The Daily Telegraph

"This is an important book, because it shows how history had not just shaped the army, its traditions and its ethos, but also how it has formed strategy, for better and for worse. As precise and profound an assessment as is imaginable of the British Army as it is today.”
— The Times (London)

"Mallinson is surely right to stress the one enduring quality of the British Army: 'operational resilience’.”
— Saul David

Allan Mallinson is a former infantry and cavalry officer. He is the author of the Matthew Hervey series of novels; Light Dragoons, a history of four regiments of British Cavalry, one of which he commanded; and The Making of the British Army. He writes on defense matters for The Times of London, the Daily Telegraph, and is a regular reviewer at the Spectator and the Literary Review. The Shape of Battle is his first book to be published in America. Allan lives in England.
Loading...
or support indie stores by buying on