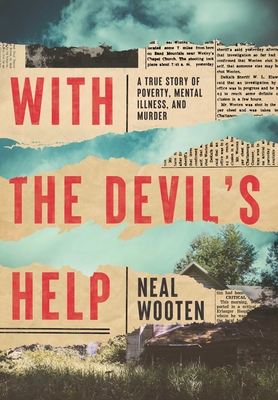 With the Devil's Help

A True Story of Poverty, Mental Illness, and Murder

In the tradition of The Glass Castle, Educated, and Heartland, Neal Wooten traces five decades of his dirt-poor, Alabama mountain family as the years and secrets coalesce.

Neal Wooten grew up in a tiny community atop Sand Mountain, Alabama, where everyone was white and everyone was poor. Prohibition was still embraced. If you wanted alcohol, you had to drive to Georgia or ask the bootlegger sitting next to you in church. Tent revivals, snake handlers, and sacred harp music were the norm, and everyone was welcome as long as you weren’t Black, brown, gay, atheist, Muslim, a damn Yankee, or a Tennessee Vol fan. The Wooten's lived a secret existence in a shack in the woods with no running water, no insulation, and almost no electricity. Even the school bus and mail carrier wouldn’t go there. Neal’s family could hide where they were, but not what they were. They were poor white trash. Cops could see it. Teachers could see it. Everyone could see it. Growing up, Neal was weaned on folklore legends of his grandfather—his quick wit, quick feet, and quick temper.  He discovers how this volatile disposition led to a murder, a conviction, and ultimately to a daring prison escape and a closely guarded family secret. Being followed by a black car with men in black suits was as normal to Neal as using an outhouse, carrying drinking water from a stream, and doing homework by the light of a kerosene lamp. And Neal’s father, having inherited the very same traits of his father, made sure the frigid mountain winters weren’t the most brutal thing his family faced.

Praise For With the Devil's Help: A True Story of Poverty, Mental Illness, and Murder…

"With the Devil's Help is a survival story in the mode of Harry Crews’ brilliant memoir A Childhood. Crews concluded that for a 'grit,' a redneck like him, survival was triumph enough. Wooten concurs."

"I devoured this book. It is engrossing, relatable, intriguing, heartbreaking and so well written. I could visualize it and that is not something that every writer can convey. The author took a brutal childhood and somehow turned it into a story filled with heart. The way he intertwined the two storylines was masterful."
— William Dameron, author of The Lie: A Memoir of Two Marriages, Catfishing and Coming Out

“A powerful story told by an excellent writer that paints a true picture of the Deep South. Neal Wooten weaves a tale that will make you cry and then laugh, often in the same paragraph. This book will draw you in and hold on to you.”
— Jerry Ellis: author of Walking the Trail: One Man’s Journey Along the Cherokee Trail of Tears

Neal Wooten grew up on a pig farm on Sand Mountain in the northeast corner of Alabama. The first person in the history of his family to graduate from high school, Neal went on to graduate from Auburn University with a B.S. in applied mathematics. He became a math teacher and director of a math school in Milwaukee, winning numerous math awards.  He is now the Managing Editor for Mirror Publishing, a contributor to the Huffington Post, columnist for The Mountain Valley News, curator of the Fort Payne Depot Museum, creator of the popular Facebook comic strip “Brad’s Pit,” and standup comedian.
Loading...
or support indie stores by buying on