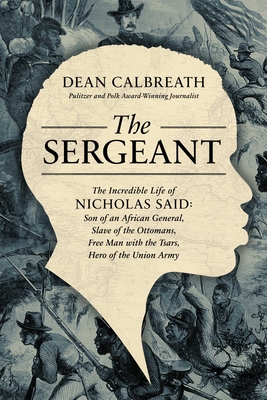 The Incredible Life of Nicholas Said: Son of an African General, Slave of the Ottomans, Free Man Under the Tsars, Hero of the Union Army

From his noble childhood in the kingdom of Borno to being kidnapped into slavery, the inspiring life-story of Nicholas Said is an epic journey that takes him from Africa and the Ottoman Empire through Czarist Russia and, finally, to heroic acclaim in the American Civil War.

In the late 1830s a young Black man was born into a world of wealth and privilege in the powerful, thousand-year-old African kingdom of Borno. But instead of becoming a respected general like his fearsome father (who was known as The Lion), Nicolas Said’s fate was to fight a very different kind of battle.    At the age of thirteen, Said was kidnapped and sold into slavery, beginning an epic journey that would take him across Africa, Asia, Europe, and eventually the United States, where he would join one of the first African American regiments in the Union Army. Nicholas Said would then spend the rest of his life fighting for equality. Along the way, Said encountered such luminaries as Queen Victoria and Czar Nicholas I, fought Civil War battles that would turn the war for the North, established schools to educate newly freed Black children, and served as one of the first Black voting registrars.   In The Sergeant, Said’s epic (and largely unknown) story is brought to light by globe-trotting, Pulitzer-prize-winning journalist Dean Calbreath in a meticulously researched and approachable biography. Through the lens of Said’s continent-crossing life, Calbreath examines the parallels and differences in the ways slavery was practiced from a global and religious perspective, and he highlights how Said’s experiences echo the discrimination, segregation, and violence that are still being reckoned with today.    There has never been a more voracious appetite for stories documenting the African American experience, and The Sergeant’s unique perspective of slavery from a global perspective will resonate with a wide audience.

Praise For The Sergeant: The Incredible Life of Nicholas Said: Son of an African General, Slave of the Ottomans, Free Man Under the Tsars, Hero of the Union Army…

“The astonishing life of Mohammed Ali ben Said is recounted in this sparkling biography. Calbreath fills in the gaps in Said’s story with digressions about the Ottoman slave trade, tensions between Black and white soldiers in the Union Army, Reconstruction-era politics, and more. The result is a fascinating bit of forgotten history.”

"No Civil War soldier hailed from more distant shores than Nicholas Said. In later years, he listed his place of residence as “traveler,” and that was an understatement. In this elegantly written biography, Dean Calbreath offers a compelling and fascinating account of a man who was born in the Bornu Empire, lived in a dozen nations and as many states, and rose to the rank of sergeant in the fabled Massachusetts Fifty-fifth Infantry. An enthralling story, brilliantly told."

“The Sergeant tells the astonishing but true story of Nicholas Said, an historical figure no novelist would dare dream up. Dean Calbreath takes us along Said’s epic journey from Africa, to Turkey, to Russia, and to the United States, where Said served in the Union Army and became a schoolteacher in the Reconstruction South. Calbreath gives invaluable and unique insight into how Said experienced slavery, discrimination, freedom, and war across the globe, making the book essential reading.”
— Henry Louis Gates, Jr., Harvard University

Dean Calbreath was part of the Polk- and Pulitzer-winning team that uncovered the biggest individual bribery scandal in Congressional history. With fellow journalists Marcus Stern and Jerry Kammer, they co-wrote The Wrong Stuff: The Extraordinary Saga of Randy “Duke” Cunningham, the Most Corrupt Congressman Ever Caught (Public Affairs). Calbreath has earned numerous awards over the past three decades for investigative, historical, and international reporting. Calbreath is also an experienced public speaker, from delivering lectures at leading colleges and universities to appearances on television, radio talk shows, and podcasts.
Loading...
or support indie stores by buying on