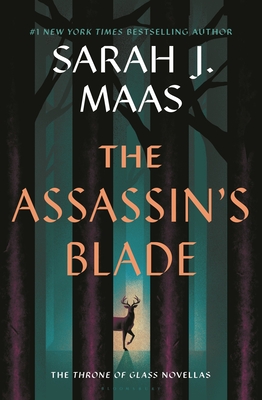 The Throne of Glass Prequel Novellas

The twist of a knife. The birth of a legend.

Step into the world of the #1 bestselling Throne of Glass series by Sarah J. Maas with this collection of prequel novellas.

Celaena Sardothien is her kingdom's most feared assassin. Though she works for the powerful Assassin's Guild and its scheming master, Arobynn Hamel, she yields to no one and trusts only her fellow killer-for-hire, Sam. But when Arobynn dispatches her on missions that take her from remote islands to hostile deserts, Celaena finds herself acting independently of his wishes and questioning her own allegiance.

If she hopes to escape Arobynn's clutches, Celaena will have to put her faith in her wits and her blade . . . knowing that if she fails, she'll lose not just a chance at freedom but her life.

A prequel to the New York Times bestselling Throne of Glass, this collection of five novellas explores the history of this cunning assassin and her enthralling-and deadly-world.


Praise For The Assassin's Blade: The Throne of Glass Prequel Novellas…

“Action-packed . . . What a ride!” - Booklist on The Assassin’s Blade
“A thrilling read.” - Publishers Weekly, starred review, on Throne of Glass
“An epic fantasy readers will immerse themselves in and never want to leave.” - Kirkus Reviews, starred review, on Crown of Midnight
“Celaena is as much an epic hero as Frodo or Jon Snow!” - New York Times bestselling author Tamora Pierce on Heir of Fire
“Packed . . . with brooding glances, simmering sexual tension, twisty plot turns, lush world building, and snarky banter.” - Booklist on Queen of Shadows
“Tightly plotted, delightful escapism.” - Kirkus Reviews on Empire of Storms
“Turns a corner from sprawling epic to thrilling psychological fantasy.” - HuffPost on Tower of Dawn
“A worthy finale to one of the best fantasy book series of the past decade.” - Time on Kingdom of Ash