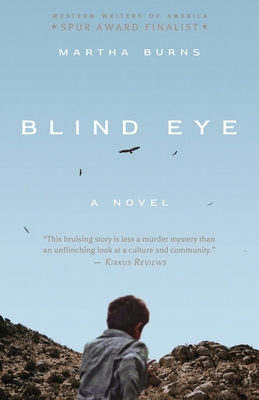 "This bruising story is less a murder mystery than an unflinching look at a culture and community." - Kirkus Reviews

"What does a boy do when things go bad at home? Who does he tell when things grow worse? Leeland didn't tell anyone--or did he? BLIND EYE tells the story of Leeland's life on a remote ranch in New Mexico. No one paid attention to what he couldn't say. Would you have listened?"

At the Bounty Canyon Ranch in Southeastern New Mexico, the bodies of Luke and Deona Pruitt are buried in a manure pit and their 14-year-old son Leeland Pruitt is missing.

Deputy Sheriff Greenwood is called out to investigate the missing Pruitt family and discovers the grim scene. Leeland's brutal upbringing was an open secret overlooked by neighbors and teachers for years. The community turned a blind eye as Leeland was moved by his cruel father from one remote ranch to another. And so, Deputy Greenwood begins a twenty-four-hour hunt to find and save the boy suspected of murdering his parents.

Blind Eye is both a tragedy and a dilemma of moral conscience. In this tale of cultural complicity, the community, at best, looked the other way and, at worst, enabled abuse, leaving us all to ask, 'What is too much to ask of a boy?'