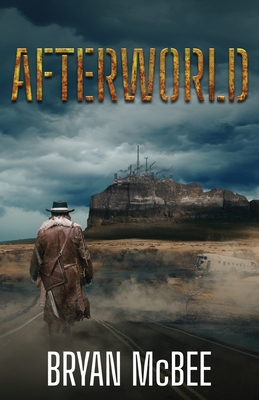 The Information Age ended with the collapse of industrial society. As the world entered a new dark age, humanity has been cast down from their dominant place in the world.

This is the world in which Simon Crandall grew up. Savage and unforgiving, gone are the cities with their towering skylines. Gone are the governments wielding global power over life and death. All that remain of their might and majesty are decaying ruins.

But when Simon discovers the key to a weapon powerful enough to destroy the world, he is pursued by enemies who will stop at nothing to prevent him from revealing this dangerous secret. Facing enemies and betrayal on all sides, Simon is determined to find this weapon first. But he is far from the only one seeking it. The survival of his people, and possibly the world hangs in the balance.

In Afterworld by Bryan McBee, war, politics, and espionage are at the forefront of this fantasy hero's quest with a modern twist. The dire consequences of humankind's choices in the past prove to have a lasting impact upon the future.