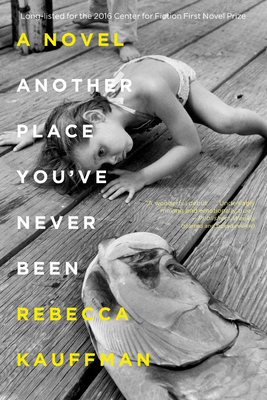 Another Place You've Never Been (Paperback)

Long-listed for the 2016 Center for Fiction First Novel Prize "A wonderful debut . . . Undeniably moving and emotionally true." --Publishers Weekly (starred and boxed review) Most of us have experienced what it's like to know what someone is going to say right before they say it. Or perhaps you have been shocked by the irrefutable phenomena of coincidence, when your life intersects with another's in the most unlikely way. In gripping prose marked by stark simplicity, Another Place You've Never Been by debut novelist Rebecca Kauffman explores the intersection of human experience amidst the minutiae of everyday life.

In her mid-thirties and still living in her hometown Buffalo, NY, Tracy spends most days at the restaurant where she works as a hostess, despite her aspirations of a career that would make use of her creative talents. Tracy's life is explored not only though her own personal point of view, but also through the viewpoints of other characters, wherein Tracy may only make a peripheral appearance or even emerge at different periods in her life.

This wonderful novel hails the emotional complexity and narrative scope of A Visit from the Goon Squad, and resonates with the strong mystical nature of Swamplandia. At its core, Another Place You've Never Been is a broad investigation of such bold ideas as the possibility that any person, at any time, in any place, could find themselves shivering in the presence of great and ancient forces; and the notion that love is perhaps "far less voluntary" than we might believe it to be.

REBECCA KAUFMAN is from rural northeastern Ohio. She received her BA in Classical Violin Performance from the Manhattan School of Music, and an MFA in creative writing from New York University. She has worked primarily in restaurants and intermittently as a teacher. She currently lives in the Shenandoah Valley of Virginia.
or
Buy Here
Copyright © 2020 American Booksellers Association