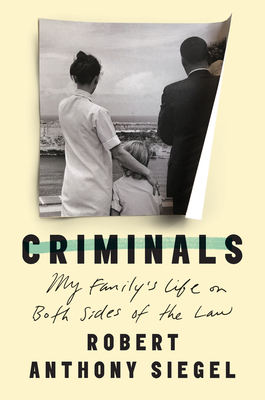 My Family's Life on Both Sides of the Law

A prismatic, provocative look at one family--led by a charismatic, defense attorney father--whose bonds exist on both sides of the law The Siegels of New York are a singular creation--quirky, idealistic, shaped in large part by Robert Anthony Siegel's father, a lovable, impossible man of gargantuan appetites and sloppy ethics, a criminal defense attorney who loved his drug-dealing clients a little too much and went to prison as a result. Siegel's mother decided to pour her energies into making her children art-loving mavens of fine dining in international settings--all the things that his father was not--with Robert as her most targeted ally. Once out of prison, Siegel's father struggled with depression, attempting to reenter legal practice, with age and finances nipping at his heels. Robert, as a son and later as an author, attempts to put all of these pieces together to make a coherent shape of family before realizing that perhaps no such thing exists. Where is the thin, permeable line between right and wrong? How does one family join the greater world of normal people beyond the demimonde of drug dealers, bikers, schemers, rock musicians, and artists that swirled around them? Criminals explores those questions without easy judgments, creating a prism of an eccentric collection of characters bound together as the mysterious tribe of family.

ROBERT ANTHONY SIEGEL is the author of two novels, All the Money in the World and All Will Be Revealed. His work has appeared in The New York Times, Los Angeles Times, Smithsonian, The Paris Review, Oxford American, and Tin House, among other venues. Siegel has been a Fulbright Scholar at Tunghai University in Taiwan and a Monbukagakusho Fellow at the University of Tokyo in Japan. Other awards include O. Henry and Pushcart Prizes and fellowships from the Fine Arts Work Center and the Copernicus Society of America.
or support indie stores by buying on
Copyright © 2020 American Booksellers Association