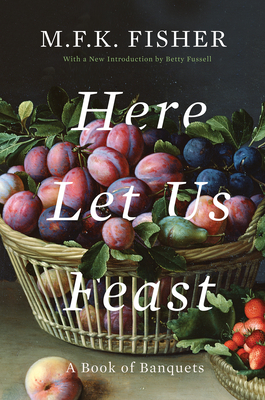 A Book of Banquets

"M.F.K Fisher’s latest excursion into the art or science of gastronomy is more an anthology of the finest writing on the subject than strictly a text of her own composition . . . A royal feast, indeed!" —The New York Times

Betty Fussell—winner of the James Beard Foundation’s journalism award, and whose essays on food, travel, and the arts have appeared in The New York Times, The New Yorker, Saveur, and Vogue—is the perfect writer to introduce M.F.K Fisher’s Here Let Us Feast, first published in 1946. The author of Eat, Live, Love, Die has penned a brilliant introduction to this fabulous anthology of gastronomic writing, selected and with commentary from the inimitable M.F.K. Fisher.

The celebrated author of such books as The Art of Eating, The Cooking of Provincial France, and With Bold Knife and Fork, Fisher knows how to prepare a feast of reading as no other. Excerpting descriptions of bountiful meals from classic works of British and American literature, Fisher weaves them into a profound discussion of feasting.

She also traces gluttony through the Old and New Testaments of the Bible, and claims that the story of a nation's life is charted by its gastronomy. M.F.K. Fisher has arranged everything perfectly, and the result is a succession of unforgettable courses that will entice the most reluctant epicure.

Praise For Here Let Us Feast: A Book of Banquets…

Praise for Here Let Us Feast

“The anthology doesn't miss a beat. And that cover! You'll need to find prominent real estate, be it the kitchen or the bookshelf, with a cover like that.” —Women.com, 1 of 10 Books with Covers So Beautiful You Can Judge Them

“[M.F.K. Fisher's] latest excursion into the art or science of gastronomy is more an anthology of the finest writing on the subject than strictly a text of her own composition. Here are extensive excerpts from such widely diversified writers as Edgar Saltus, Petronius Arbiter, Tobias Smollett, Lucius Apuleius, Ovid, Rabelais, Plato and others. Mrs. Fisher begins her book with the introductory verse to the King James Version of the Bible: 'In the beginning God created the heaven and the earth.' And she concludes with long excerpts from gastronomic Americana, ranging from Washington Irving to Ernest Hemingway. Spread thickly in between is a royal feast, indeed!” —The New York Times

“Her erudite prose slices through myriad time periods and cultures, spanning the globe—and beyond—in fact and fantasy . . . Feast is a taste well worth acquiring. You'll get your intellectual fill.” —VEER Magazine

“Extensively revised by the author, this enlightening cornucopia of writings toasts the pleasures of food, drink and celebration in literature. It also marks the first time in years that the complete works of Fisher, an authority on gastronomy and an elegant crafter of prose, are available. Eleven chapters present selections varying in length from a few paragraphs to several pages that begin with the ancient Chinese and Greeks and the Bible and progress to the pioneers of America, while pausing to linger in the literatures of England, France, Germany, Russia (among others). This is a refreshing, nourishing and fulfilling sampler from a connoisseur of a genre she has created.” —Publishers Weekly

“This is unique... a collection of excerpts from world literature, concerned with eating and drinking. [Fisher] ranges from Chinese literature, ancient and modern; Richard Burton, T. E. Lawrence, Marco Polo, adventurers all; Smollett, Rabelais, Boccaccio, Shakespeare, Pepys, Scott, Thackeray, Dickens, to the moderns, via the Middle Ages, the Renaissance, the 19th century. Period– country– the story of a nation's life is charted by its gastronomy, she claims. There are bits from fiction, from letters, there are proverbs, there are recipes. There are the famous chefs whose names have come down,– Brillat–Savarin, Escoffier, Ritz. There's gastronomy in fantasy and nonsense, in history of pioneering, in regional writing, in studies of manners. And always– in her inimitable way– there is M. F. K. Fisher. Very specialized.” —Kirkus Reviews

Mary Frances Kennedy Fisher, as M F. K. Fisher was the preeminent American food writer. She wrote thirty-three books, including a translation of The Physiology of Taste by Jean Anthelme Brillat-Savarin. Her first book, Serve It Forth, was published in 1937. Fisher's books are an amalgam of food literature, travel, and memoir.

Betty Fussell was born in Southern California in 1927. Her most recent book is Eat, Live, Love, Die. She was recently celebrated, along with other winners of the Silver Spoon Award, by Food Arts magazine.
Loading...
or support indie stores by buying on