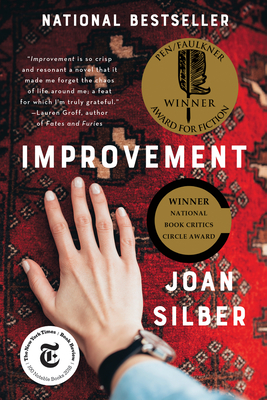 “Without fuss or flourishes, Joan Silber weaves a remarkably patterned tapestry connecting strangers from around the world to a central tragic car accident. The writing here is funny and down–to–earth, the characters are recognizably fallible, and the message is quietly profound: We are not ever really alone, however lonely we feel.” —The Wall Street Journal

“This is a novel of richness and wisdom and huge pleasure. Silber knows, and reveals, how close we live to the abyss, but she also revels in joy, particularly the joy that comes from intimate relationships . . . A perfectly balanced mix of celebration and wryness.” —The New York Times Book Review

“It feels vital to love Silber’s work, which has been too little loved, too little mentioned, beyond a small readership that seems to be composed mostly of other writers. Silber is 72, and with Improvement has written at least three truly great books. Now is the moment to appreciate that she is here, in our midst: our country’s own Alice Munro. Silber’s great theme as a writer is the way in which humans are separated from their intentions, by desires, ideas, time . . . Like Grace Paley and Lucia Berlin, she’s a master of talking a story past its easiest meaning; like Munro, a master of the compression and dilation of time, what time and nothing else can reveal to people about themselves. She has an American voice: silvery, within arm’s length of old cadences, but also limber, thieving, marked by occasional raids on slang and jargon, at ease both high and low, funny, tenderhearted, sharp. It gives her the rare ability to reach the deepest places in the plainest ways.” —The Washington Post

“If your must–read this month is a love–and–loss story seasoned with single motherhood and smuggling schemes, National Book Award finalist Joan Silber's Improvement hits the sexy sweet spot from page one.” —Elle

“My revelation of the year was the writing of Joan Silber . . . I was immediately captivated by her fictional method, a cross between the novel and linked stories, in which a minor character in one chapter will become a major figure in another. This connect–the–dots narrative structure makes possible wide leaps over time and space, while still offering that sense of connection and emotional depth that makes the best fiction so satisfying.” —Ruth Franklin, The Paris Review