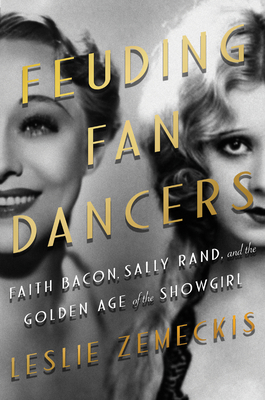 Faith Bacon, Sally Rand, and the Golden Age of the Showgirl

Historian Leslie Zemeckis reveals the lost stories of Sally Rand and Faith Bacon—icons who each claimed to be the inventor of the notorious fan dance. Nearly one hundred years later, both women come alive again.

Praise For Feuding Fan Dancers: Faith Bacon, Sally Rand, and the Golden Age of the Showgirl…

“Feuding Fan Dancers is a vivid account of the highs and lows of two of America’s greatest performers. Leslie Zemeckis repositions the often misunderstood and overlooked lives of female pioneers in the entertainment industry to the iconic status they have always deserved. You will have a hard time putting this book down.” —Ari Seth Cohen, creator of Advanced Style

“Zemeckis has once again given us a fascinating history of entertainment, a bold story of two brave women and the origins of the fan dance. A page–turning time machine to another era. Don’t miss it.” —Sara Gruen, New York Times bestselling author of Water for Elephants and At the Water’s Edge

“In Feuding Fan Dancers, Leslie Zemeckis artfully brings to life the rivalry between two of the best known showgirls of the early twentieth century, Faith Bacon and Sally Rand. With her trademark skill, wit, meticulous research, and eye for detail, Zemeckis opens the door to a world that is fun, fierce, and unforgettable.” —Pam Jenoff, New York Times bestselling author of The Orphan’s Tale

“In this love letter to performers of silent films and the vaudeville circuit, Zemeckis (Goddess of Love Incarnate) takes a deep dive into the hardscrabble lives of two of the most famous performers of the 1930s . . . Zemeckis brings to vivid life these two performers in an exciting era.” —Publishers Weekly

“Zemeckis (Goddess of Love Incarnate, 2015) is a tenacious historian of the lost days of burlesque.” —Booklist

“Fascinating and page–turning dive into the lives of Bacon and Rand . . . A meticulous, behind–the–scenes analysis into the intersection of show–business and femininity in post–Depression America . . . Here, finally, is the story of these two largely forgotten women.” —Rick Paulas, Topanga Journal

“Feminist histories of the Golden Age of entertainment, particularly those that have gone underreported, take the spotlight in a large amount of Leslie Zemeckis’s creative work. My, how it shines ever so brightly in the author–actress–filmmaker’s latest endeavor.” —Greg Archer, Palm Springs Life

“Compelling story of two burlesque icons during the 1930s and '40s and their nail–biting rivalry.” —Giana León, Santa Barbara Magazine

Leslie Zemeckis is the author of Behind the Burly Q, the definitive history of burlesque. She wrote/produced/directed the critically acclaimed documentary based on the book, which has been championed by USA Today and The New Yorker. Behind the Burly Q has just been optioned for a television series and a pilot is under–development. She released "Bound by Flesh," a multi–award winning documentary about vaudeville Siamese twin superstars Daisy and Violet Hilton, in 2014. She is an actress and filmmaker.
Loading...
or
Not Currently Available for Direct Purchase