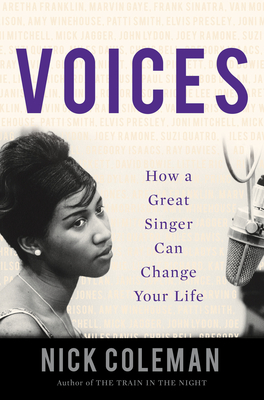 How a Great Singer Can Change Your Life

"Voices isn't just illuminating and thought–provoking and clever; it is exciting." —Roddy Doyle, author of The Commitments

A personal exploration of what singing means and how it works, Voices is a book about our deepest, most telling relationships with music. Nick Coleman examines the act of singing not as a performance, but as a close, difficult moment of hopeful connection. What does it do to us, emotionally and psychologically, to listen hard and habitually to somebody else’s singing? Why is human song so essential to our lives? The book asks many other questions, too: Why did Jagger and Lennon sing like that (and not like this)? Billie, Janis, Amy: must the voices of anguish always dissolve into spectacle? What makes us turn again and again to a singing human voice?

The history of postwar popular music is often told sociologically or in terms of musicological influence and innovation in style. Voices offers a different, intimate perspective. In ten discrete but cohering essays, Coleman tackles the arc of that history as an emotional experience with real psychological consequences. He writes about the voices that have affected the ways he feels about and understands the world—from Aretha Franklin to Amy Winehouse, Marvin Gaye to David Bowie. Ultimately, Voices is the story of what it is to listen and be moved—what it is to feel emotion.

Praise For Voices: How a Great Singer Can Change Your Life…

"What makes a singer brilliant? Nick Coleman beautifully articulates the criteria in Voices . . . He’s a ravishing and witty stylist. He also has a poignant story of his own to tell: Coleman is totally deaf in one ear and suffers from in–and–out loss in the other. If anything, however, those challenges seem to have only amplified his awareness of humanity’s purest means of expression.” —Jim Farber, Billboard

“Deafness is a particularly horrible condition for a music critic. But just as Beethoven didn’t need his hearing to compose some of his greatest music, Mr. Coleman doesn’t need it to write beautifully about music: He hears, listens, better with a quarter of an ear than most of us do with both. He has the knack of summing up a singer with an epigram that makes the listener thrill in agreement . . . Every reader and listener is rewarded.” —Wesley Stace, The Wall Street Journal

“Covers pop vocal standouts including the laryngeal grind of Suzi Quatro, the timbral acrobatics of Margaret O'Hara, the purgatorial wail of Patti Smith and the gentle quaver of the Kinks' Ray Davies . . . A personal survey of a varied corpus . . . The celebration of grain, roughness, imperfection, lo–fi and, really, any sound at all.” —Jonathan Leal, Los Angeles Times

“One singer can transport a listener, while another might leave the same listener cold. It’s a mystery, one that British arts and music journalist Coleman explores by way of examining the power of the voice itself and how it defines the work of singular performers including Aretha Franklin, Billie Holiday, Mick Jagger, Roy Orbison, and Patti Smith.” —Publishers Weekly

“Coleman has endured severe hearing loss since 2007, but that hasn't dampened his appreciation of popular music. Here, he takes readers on his personal journey through the songs that have influenced him, most of them from his formative years in the 1960s and '70s . . . He makes many astute observations . . . Pleasure in music, writes Coleman, 'is arguably the most complicated pleasure there is.' This book proves the truth of that statement.” —Kirkus Reviews

“Voices isn't just illuminating and thought–provoking and clever; it is exciting.” —Roddy Doyle, author of The Commitments

Praise for The Train in the Night

“This is a book for anyone who grew up with pop music, listens to it still and has spent too much time thinking about it and talking about it. But it's also a book about love and loss and middle age and looming mortality, written with grace and the driest imaginable humour. I'm not sure I can recommend it highly enough.” —Spectator

“Coleman is a spirited person, who writes with an irresistible Hornby–esque skip in his style... funny and admirable.” —Andrew Motion, Guardian

“In a story told with warmth, wit, candour and dry, self–deprecating humour and without a whiff of self–pity... Coleman is insightful and convincing in his musings on music's emotional impact, funny in his recollections of the pains of growing up and sharp in his analysis of the thorny issue of musical 'taste.'“ —Time Out

“A beautiful, elegiac ballad. Coleman writes elegantly and movingly of his youth, of growing up and of his intimate relationship with an art form that has shaped his memories.” —Financial Times

“A deft and heartfelt exploration of music, silence, adolescence, English pop and the emotional consequences of serious illness, and above all a discussion of something modern culture has very nearly lost touch with – the idea, and the desirability, of taste.” —D. J. Taylor, author of The Prose Factory

“Full of melancholy wit, it's sure to beguile fans of Nick Hornby.” —Hephzibah Anderson, Mail on Sunday

“Coleman imbues his writing with a dry wit that enlivens the everyday, and with pithy character descriptions.” —Independent on Sunday

“Sharp, witty and beautifully written, it only takes moments to fall head first into the beautiful style of Pillow Man.” —We Love This Book

Following a brief spell as a stringer at NME in the mid–1980s, Nick Coleman was music editor of Time Out for seven years, then arts and features editor at the Independent and the Independent on Sunday. He has also written on music for The Times, The Guardian, The Telegraph, New Statesman, Intelligent Life, GQ, and The Wire. He is the author of The Train in the Night, which was short–listed for the 2012 Wellcome Book Prize.
Loading...
or
Not Currently Available for Direct Purchase