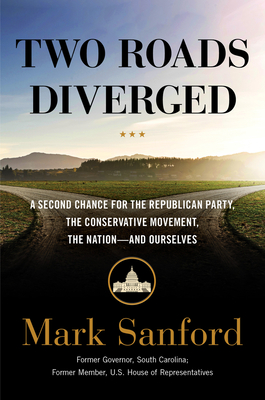 A Second Chance for the Republican Party, the Conservative Movement, the Nation— and Ourselves

Former Republican Governor and Congressman Mark Sanford shares his brutally honest and hard-hitting political memoir, Sanford first tells the story of his two very different falls and how the hard lessons he learned from the first led him to inevitably choosing the second by maintaining his integrity and opposing Trump.

In Two Roads Diverged Sanford analyzes the immense harm he believes Trump’s presidency of lies, cronyism, shady dealings, and bullying caused to our country, and especially to the Republican party. Within four years, the GOP was synonymous with fake news, extreme divisiveness, and brazen lies. Rather than becoming great again, the party had degenerated into a personality cult centered around Donald Trump. But Sanford strongly believes that the Republican party has a choice at its current crossroads. Two Roads Diverged is also a serious examination of what what fellow conservatives can do to help calm today’s political waters and build a better future for both the party and the country. As he was, the GOP has been given a second chance…if those in the party are wise enough to recognize it, and brave enough to take it.


Praise For Two Roads Diverged: A Second Chance for the Republican Party, the Conservative Movement, the Nation— and Ourselves…

"Two Roads Diverged well describes the Republican Party these days, and consequently the road we pick going forward has remarkable implications for our country. This book makes a timely and valuable contribution to that decision, and I highly recommend." —Congressman Adam Kinzinger, U.S. Representative for Illinois's 16th Congressional District

Mark Sanford served as the 115th Governor of South Carolina. He has twice represented the First District of South Carolina in the U.S. Congress, has worked in real estate, operated his family farm, and has had the blessing and honor of raising four great sons. In Washington, DC, as a U.S. Representative and as governor of South Carolina, his record as a fiscal reformer and budget hawk was incontestable.
Loading...
or
Not Currently Available for Direct Purchase