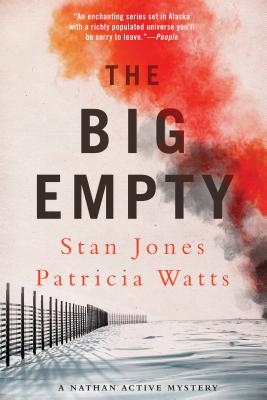 Police Chief Nathan Active investigates a plane crash out in Alaska’s Big Empty—and what he finds there casts suspicion of murder on several locals in his small town of Chukchi.

Evie Kavoonah, a young mother-to-be, and her fiancé, Dr. Todd Brenner, are on a flight over the Brooks Range when their bush plane runs out of gas and hits a ridge, instantly killing them both. Chukchi police chief Nathan Active doubts he’ll find anything amiss when his close friend, Cowboy Decker, asks him to look into the possibility of foul play. Evie was like a daughter to Cowboy, who trained her to fly, and he insists there’s no way his protégée made a fatal mistake that day. Nathan reluctantly plays along and discovers that Cowboy’s instincts are correct—the malfunction that led to the crash was carefully planned, and several people in the village have motives for targeting the pair.

Meanwhile, Nathan’s wife, Gracie, is pregnant, but so scarred by memories of domestic abuse that she isn’t sure she should have the baby. Nathan must support her and their adopted daughter, Nita, while managing an increasingly complex and dangerous murder case.

Praise For The Big Empty (A Nathan Active Mystery #6)…

Praise for The Big Empty

“Works well on all levels . . . The Big Empty is the most tightly-crafted Nathan Active story yet, and for both longtime fans of the series as well as those unfamiliar with it, it’s a good yarn that will draw readers in and keep them turning pages.”
—The Anchorage Daily News

“Intriguing . . . buttressed by the family melodrama and the authors’ insights into the culture of Alaska’s indigenous peoples.”
—Publishers Weekly

“Jones's and coauthor Watts's prose has been called muscular and stark, but it has an inviting, cinematic quality to it as well. A well-constructed mystery recommended for fans of C.J. Box and Craig Johnson.”
—Booklist

"[The Big Empty] does a good job of spinning a mystery in an interesting setting with a understated style that explores but avoids exoticizing the Inupiat community it depicts.”
—Reviewing the Evidence

Praise for the Nathan Active Mysteries

“You can’t fake the stuff Stan Jones pulls off . . . A writer of muscular words and stark images, Jones sets up his scenes like film shots.”
—The New York Times Book Review

“Jones delivers a finely laddered plot . . . but the real fun, as always, lies in the dozens of mini-lessons he gives on hardscrabble Alaskan life.”
—Entertainment Weekly

“Active is a sturdy, reliable figure, and Jones has a palpable affection for the Alaskan Native culture and his eccentric characters.”
—Seattle Times

“We’re in the hands of a skilled mystery/crime writer. Without mincing on tone or texture, Jones’s writing displays a telling tautness, complemented by comic riff nuances of a dry-witted humorist.”
—Anchorage Press

“Stellar . . . Jones, who was born in Alaska, uses his intimate knowledge of the state, his fondness for the Inupiat people and their traditions, and his eye for politicians’ excruciatingly funny incongruities to produce a well-rounded and appealing portrait of America’s Last Frontier.”
—Publishers Weekly, Starred Review

Stan Jones is a native of Alaska and a former bush pilot. He has worked as an award-winning journalist and environmentalist. He is the coauthor of the nonfiction book The Spill, as well as the author of five other mysteries in the acclaimed Nathan Active series, including White Sky, Black Ice; Shaman Pass; Frozen Sun; Village of the Ghost Bears; and Tundra Kill. He and Patricia Watts are collaborating on the next Nathan Active mystery.


Patricia Watts began writing fiction after a 20-year career as a journalist in Texas, Hawaii, and Alaska, and a decade as a human rights investigator in Anchorage. She is also the author of Watchdogs and The Frayer, noir suspense novels set in Fairbanks, Alaska. She now lives in San Diego, where she is working on her next novel.
Loading...
or
Not Currently Available for Direct Purchase