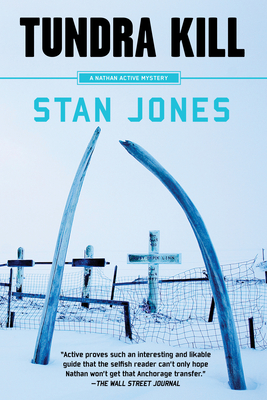 When Chukchi Police Chief Nathan Active discovers dirt on the governor of Alaska, the woman he is appointed to protect, he finds himself in a precarious position: Expose the truth and risk his job or become complicit in her dangerous affairs?

Nathan Active, the top cop in a swath of Alaskan tundra larger than fifteen other US states, has been assigned to bodyguard duty for Alaska’s celebrity female governor, Helen Mercer, while her husband runs the Isignaq, a 400-mile sled-dog race through the Arctic wilderness. Against his will, Active is suddenly swept into her bizarre family affairs and outsized political ambitions. And when he connects the death of a local dog musher to Mercer, her countermoves threaten to ruin the lives of Active’s beloved Grace Palmer and her daughter, Nita. With his career on the line, Active must outwit the governor and save the people he cares for most before time runs out.

"Active is a sturdy, reliable figure, and Jones has a palpable affection for the Alaskan Native culture and his eccentric characters."
—Seattle Times

"Stellar . . . Jones, who was born in Alaska, uses his intimate knowledge of the state, his fondness for the Inupiat people and their traditions, and his eye for politicians’ excruciatingly funny incongruities to produce a well-rounded and appealing portrait of America’s Last Frontier."
—Publishers Weekly, Starred Review

"Tundra Kill is good, a solid mystery and procedural crime novel with appealing lead characters, an engaging story and a fully-realized setting. It hits all the right genre notes."
—Fairbanks Daily News-Miner

"We're in the hands of a skilled mystery/crime writer. Without mincing on tone or texture, Jones' writing displays a telling tautness, complemented by comic riff nuances of a dry-witted humorist."
—Anchorage Press

Stan Jones is a native of Alaska. He has worked as an award-winning journalist and a bush pilot. He is the author of five other mysteries in the acclaimed Nathan Active series, including White Sky, Black Ice; Shaman Pass; Frozen Sun; Village of the Ghost Bears; and The Big Empty.
Loading...
or support indie stores by buying on