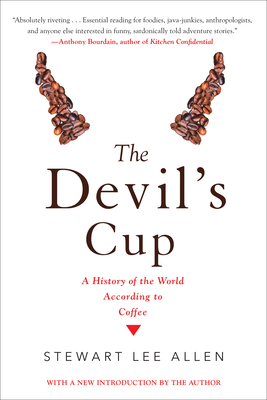 
Full of humor and historical insights, The Devil’s Cup is not only ahistory of coffee, but a travelogue of a risk-taking brew-seeker.

In this captivating book, Stewart Lee Allen treks three-quarters of the way around the world on a caffeinated quest to answer these profound questions: Did the advent of coffee give birth to an enlightened western civilization? Is coffee the substance that drives history? From the cliffhanging villages of Southern Yemen, where coffee beans were first cultivated eight hundred years ago, to a cavernous coffeehouse in Calcutta, the drinking spot for two of India’s Nobel Prize winners . . . from Parisian salons and cafés where the French Revolution was born, to the roadside diners and chain restaurants of the good ol’ USA, where something resembling brown water passes for coffee, Allen wittily proves that the world was wired long before the Internet. And those who deny the power of coffee (namely tea drinkers) do so at their own peril.

Praise for The Devil’s Cup

“Who knew that the story of coffee was such a fascinating saga of cruelty, madness, obsession, and death? The Devil’s Cup is absolutely riveting, alternating between the informative and the hilarious. Essential reading for foodies, java-junkies, anthropologists, and anyone else interested in funny, sardonically told adventure stories.”
—Anthony Bourdain, author of Kitchen Confidential

“The Devil’s Cup is hugely entertaining and thoroughly edifying.”
—Dave Eggers, author of The Monk of Mokha

"Stewart Lee Allen is the Hunter S. Thompson of coffee, offering a wild, caffeinated, gonzo tour of the World of the Magic Bean. His wry, adventurous prose delights, astonishes, amuses, and informs."
—Mark Pendergrast, author of Uncommon Grounds: The History of Coffee and How It Transformed Our World

“Great fun . . . I will never look at my morning brew the same way again.”
—Jeff Greenwald, author of Shopping for Buddhas

“Funny as hell. Stewart Allen’s pursuit of the perfect coffee bean whisks the amused reader past Ethiopian bandits, around Parisian waiters, and into aromatic dens from Turkey to Brazil. Good to the last drop.”
—Mort Rosenblum, author of Olives

“Allen enjoys his cup to the last drop, and there’s nothing decaffeinated about his wonderfully tasty brew. A must for both Java junkies and travel lovers.”
—Kirkus Reviews

“Appealingly offbeat . . . Made of equal parts inspired travel writing and savvy cultural criticism . . . the work strikes just the right balance between the frenetic praise of a bug-eyed caffeine freak and the informed observations of a true connoisseur.”
—Publishers Weekly

Stewart Lee Allen's books on how food and drink shape human society have been translated into fifteen languages. He currently lives in Manhattan.
Loading...
or support indie stores by buying on