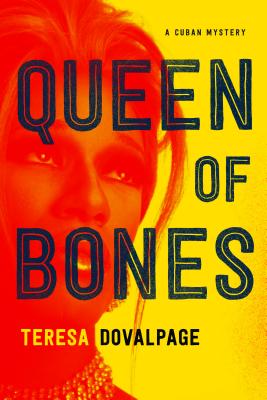 Juan, a Cuban construction worker who has settled in Albuquerque, returns to Havana for the first time since fleeing Cuba by raft twenty years ago. He is traveling with his American wife, Sharon, and hopes to reconnect with Victor, his best friend from college—and, unbeknownst to Sharon, he also hopes to discover what has become of two ex-girlfriends, Elsa and Rosita.

Juan is surprised to learn that Victor has become Victoria and runs a popular drag show at the local hot spot Café Arabia. Elsa has married a wealthy foreigner, and Rosita, still single, works at the Havana cemetery. When one of these women turns up dead, it will cost Padrino, a Santería priest and former detective on the Havana police force, more than he expects to untangle the group’s lies and hunt down the killer.

Praise For Queen of Bones (A Havana Mystery)…

Praise for Queen of Bones

“A surprising journey . . . The intricate plot and the descriptions of today’s Cuban culture and society make this novel an entertaining and illuminating read.”
—NBC News

“Dovalpage wields her considerable authorial skill in this intricately plotted tale of jealousy, revenge, and the dark side of love.”
—Isabella Maldonado, award–winning author of the Veranda Cruz mysteries

“A lesser-known Cuba, with the kind of details that make it a home rather than a holiday, so an ocean breeze can carry a tinge of exhaust fumes. And it’s a suspense-filled Cuba, in which a door closing can sound like a gun shot . . . If you’re keen to explore Havana, heap a spoonful of Teresa Dovalpage’s storytelling onto your plate, and dig in!”
—Chicago Review of Books

“Cuban-born New Mexico resident Dovalpage adeptly draws on her heritage, intertwining her native country's tumultuous history with the contemporary experiences of the Cuban diaspora. While the collision of past and present produces fatal results, the ensuing labyrinthine journey provides readers with plenty of compelling diversions along the way.”
—Shelf Awareness

“A story that blends intricate legwork in the name of investigating with a meditation on the meaning of family, nation, and home.”
—Crime Reads

"Cuba shines here, as Havana native Dovalpage contrasts its politics and society over a generation, making this a good bet for armchair travelers as well as mystery buffs."
—Booklist

“A truly atmospheric mystery that delves deep into the theme of homecoming and all the secrets we think we leave behind. The novel’s greatest strength lies in Dovalpage’s excellent portrayal of an island nation that has retained its unique cultural identity even as it adapts to the times, and its parallel to protagonist Juan Chiong’s own personal development . . . a rich exploration of Cuban life through the lens of a murder mystery.”
—Criminal Element

“Deftly unfolding details within the action, she reveals Cuba and its people as rich with fascination and depth . . . Dovalpage's writing hints at the possibility that she will be to Cuba what Donna Leon has become for Venice.”
—New York Journal of Books

“Amusing, observant . . . [A] devastating depiction of prejudice in 1980s Cuba.”
—The Miami Herald