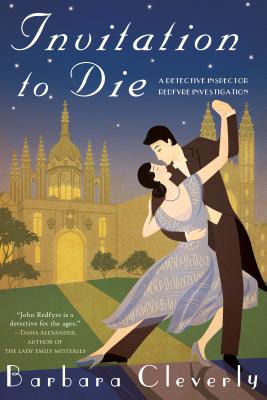 An invitation to dine turns deadly as DI John Redfyre returns for his second investigation.

Cambridge, 1924 in early summertime. May Balls, punting on the Cam, flirting and dancing the tango are the preoccupations of bright young people, but bright young Detective Inspector John Redfyre finds himself mired in multiple murders.

One morning, his dog discovers a corpse neatly laid on a tombstone in the graveyard adjoining St. Bede’s College. An army greatcoat and well-worn boots suggest the dead man may have been a former soldier, though the empty bottle of brandy and a card bearing the words “An Invitation to Dine” on the victim ring a discordant note. Even more unsettling is the autopsy, which reveals death by strangulation and unusual contents in the stomach from the man’s last meal. Redfyre learns that this murder is one of several unsolved cases linked to a secretive and sinister dining club at St. Bede’s.

Redfyre, himself an ex-rifleman, becomes caught in a dark tale of revenge, betrayal and injustice—a lingering mystery from a long-forgotten war. With the unlikely assistance of his lead suspect, he gradually unearths the dead man’s story and fights to right an ancient wrong.

Praise For Invitation to Die (An Inspector Redfyre Mystery #2)…

Praise for Invitation to Die

"Cleverly, as always, creates an intriguing and intelligent plot, multifaceted characters and pitch-perfect period and place. One of the best practitioners of the genre—and one who deserves a wider audience—her latest effort reaffirms her stature and her appeal to discriminating and discerning readers."
—Fredericksburg Freelance-Star

“Cleverly’s characters, from the good-natured but determined Redfyre; to the curmudgeon Detective Superintendent MacFarlane; to Redfyre’s Aunt Hetty, dedicated to winning the vote for woman while attempting to find a suitable wife for Redfyre, are three-dimensional and delightful in their eccentricity . . . Invitation to Die is the perfect book for those who like a little humor served with their murder.”
—New York Journal of Books

Praise for Fall of Angels

“John Redfyre is a detective for the ages.”
—Tasha Alexander, New York Times bestselling author of Death in St. Petersburg

“Charmingly old-fashioned . . . Cleverly resolves the mystery with her customary expertise and good taste. But she’s human enough to take the occasional jab at men who make the rules of society, ‘smothering female talent, gagging and belittling their wives and daughters.’”
—The New York Times Book Review

“The inspector’s earnestness is well-tempered by a good deal of wit and charm. And Ms. Cleverly displays a sure knowledge of the personal attitudes, social conditions, science and slang of a fascinating transitional period in history.”
—The Wall Street Journal

“Cleverly, known for the intricate puzzles she creates and the depth with which she draws her sleuths, has another winner in Redfyre. With dry humor to leaven a frightening story, richly imagined characters and a sure sense of place and time, she leaves the reader eager for Redfyre’s next case.”
—Richmond Times-Dispatch

Barbara Cleverly was born in the north of England and is a graduate of Durham University. She lives in Cambridge and is the author of twenty books. Thirteen of these are the Joe Sandilands investigations; the first, The Last Kashmiri Rose, was named a New York Times Book of the Year, and the third, The Damascened Blade, won the CWA Ellis Peters Historical Dagger. She has written one other novel in the John Redfyre series, Fall of Angels.
Loading...
or
Not Currently Available for Direct Purchase