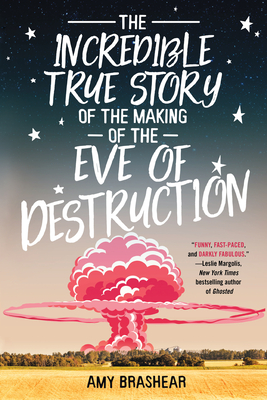 "Though the story takes place in the '80s, it feels eerily timely."—Bustle

Arkansas, 1984: The town of Griffin Flat is known for almost nothing other than its nuclear missile silos. MAD—Mutually Assured Destruction—is a fear every local lives with and tries to ignore. Unfortunately that’s impossible now that film moguls have picked Griffin Flat as the location for a new nuclear holocaust movie, aptly titled The Eve of Destruction.

When sixteen-year-old Laura Ratliff wins a walk-on role (with a plus-one!) thanks to a radio call-in contest, she is more relieved than excited. Mingling with Hollywood stars on the set of a phony nuclear war is a perfect distraction from being the only child in her real nuclear family—which has also been annihilated. Her parents are divorced, and her mother has recently remarried. Her father, an officer in the Strategic Air Command, is absent . . . except when he phones at odd hours to hint at an impending catastrophe. But isn’t that his job?

Laura’s only real friend is her new stepbrother, Terrence. She picks him as her plus-one for the film shoot, enraging her fair-weather friends. But their anger is nothing compared to what happens on set after the scripted nuclear explosion. Because nobody seems to know if a real nuclear bomb has detonated or not.

"Though the story takes place in the '80s, it feels eerily timely."
—Bustle

"[Brashear] mixes the real and fictional and then gives the mix an extra twist."
—Alabama Public Radio

"With steadily rising tension, plenty of high jinks and a steady stream of fun ’80s pop-culture and music references—many of which are lovingly and hilariously explained in footnotes for today’s Gen Z teen readers—Brashear’s story is a surefire winner."
—BookPage

"This tragicomic story of Laura and her motley crew is a page-turner from start to finish . . . A clever, superbly written, laugh-out-loud-hilarious story within a story and movie within a movie about nuclear war anxiety in small-town America. You might not learn to love the bomb, but you will love this book."
—Kirkus Reviews, Starred Review

"This snarky and insightful historical novel will ring true with many young adults. A strong pick for YA shelves."
—School Library Journal, Starred Review

"Brashear sprinkles the novel with information about the '80s, offering a nuanced sense of time and what it felt like to grow up under nuclear threat . . . In this moment where what constitutes fact is up for debate, Brashear's seemingly nostalgic romp is extremely timely."
—Publishers Weekly

“Funny, fast-paced, and darkly fabulous . . . imagine Wargames redone and served up with a twist.”
—Leslie Margolis, New York Times bestselling author of We Are Party People and Ghosted

“This book is smart, irreverent, and hilarious in how it covers everything from the relevant and real paranoia of nuclear war to how to record a bootleg. A teenager’s small town in Arkansas is chosen as the set for a new movie about the end of the world. The book follows the girl’s participation in the making of the movie and the mystery around the ever-persistent bomb sirens. A HUGE twist of all twists at the end! Loved it!”
—Lillian James, Island Books, WI

Praise for No Saints in Kansas

"A must read . . . carefully researched."
—The New York Post

"Gripping and fast-paced, this meticulously researched historical fiction will reinvigorate a new generation to Capote and tell another side of the Clutter murders."
—The Emporia Gazette

"Brashear’s stunning YA novel is as spectacularly written as it is researched. This is definitely one of the most unique YA novels you’ll read this year."
—PASTE Magazine

Amy Brashear has deep ties to the state of Arkansas. She grew up with family near Damascus: home of the infamous 1980 “Damascus Incident,” where an accidental explosion in a Titan II silo almost triggered a nuclear war. Inspired by this real event, The Incredible True Story of the Making of the Eve of Destruction is her second novel. Her first novel, No Saints in Kansas, is a YA fictional reimagining of In Cold Blood.
Loading...
or
Not Currently Available for Direct Purchase