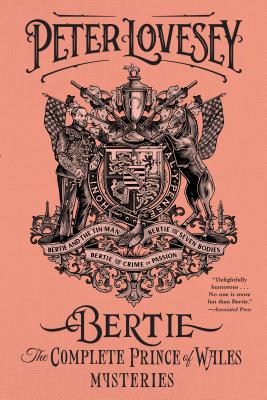 The Complete Prince of Wales Mysteries collects all three of Peter Lovesey’s charming and thrilling Bertie adventures in a single volume for the first time.

Albert Edward, Prince of Wales—Bertie, as he’s known—is the eldest son of Queen Victoria, and future King Edward VII. Bertie is a pleasure seeker, always searching out the best meals, the most beautiful women, and the most lavish parties.

As Prince Regent, Bertie is expected to behave like a proper royal and avoid scandal. Instead, his love of excitement leads him to a decidedly unprincely hobby: sleuthing. Bertie is not the best detective, but that does not stop him from trying to solve every case that crosses his path, including the feverish suicide of the greatest jockey of the century, the mysterious death of a member of the royal hunting party, and the murder of the son-in-law of an old friend.

Praise for the Prince of Wales mysteries

“Delightfully humorous . . . No one is more fun than Bertie.”
—Associated Press

“An utterly charming series . . . What a delight!”
—The New York Times

“Lovesey proved himself the world’s foremost concocter of latter-day Victoriana in his series of mysteries built around Sergeant Cribb . . . The rueful, candid voice he gives to the fleshy prince rings true, the details of the horse-racing and music-hall worlds are vivid, and much of the tale is sweetly funny.”
—Time

“An engaging conundrum in the tradition of Agatha Christie.”
—Philadelphia Inquirer

“Detection both scrupulous and surprising . . . A substantial whodunnit; truly original, most entertaining.”
—The Literary Review

“A hugely entertaining racing thriller . . . with a mixture of royal cunning and Flashman-style caddishness. It's Dick Francis by gaslight.”
—Daily Express

“These stories are a delightful combination of an engaging mystery for the prince to disentangle and the humor in watching a likeable amateur sleuth who is not quite as astute as he thinks he is. Each aspect of the historical world is conveyed through the atmospheric setting and the variety of characters. This is one of those journeys into a historical mystery that pleases on every level. The mysteries are solid and well plotted, but it is the sleuth who is always engaging.”
—Deadly Pleasures Magazine

“This omnibus collection brings together three novels starring Bertie as an amateur sleuth, written in the 1980s and '90s and all featuring sparky writing, masterful plotting, and fall-off-your-barstool hilarity.”
—Booklist, Starred Review

“For all Lovesey's ingenuity, the deepest pleasures here involve not the plotting . . . but the charmingly invincible obtuseness of his narrator/sleuth, who remains as winning a loser now as he was 30 years ago.”
—Kirkus Reviews

Peter Lovesey is the author of more than thirty highly praised mystery novels. He has been named a Grand Master by the Mystery Writers of America and has been awarded the CWA Gold and Silver Daggers, the Cartier Diamond Dagger for Lifetime Achievement, the Strand Magazine Award for Lifetime Achievement, the Macavity, Barry, and Anthony Awards, and many other honors. He lives in West Sussex, England.
Loading...
or
Not Currently Available for Direct Purchase