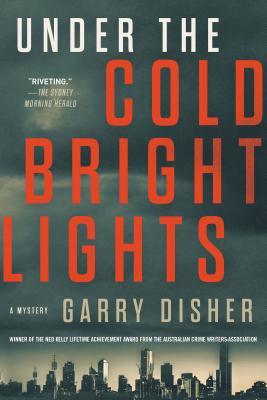 Under the Cold Bright Lights

A cold-case investigator will stop at nothing to find justice in this gripping standalone by Australian crime legend Garry Disher.

The young detectives think Alan Auhl is washed up, but that doesn’t faze him. He does things his own way—and gets results.

He still lives with his ex-wife, off and on, in a big house full of random boarders and hard-luck stories. And he’s still a cop, even though he retired from Homicide some years ago.

He works cold cases now. Like the death of John Elphick—his daughters are still convinced he was murdered; the coroner is not so sure. Or the skeleton that’s just been found under a concrete slab. Or the doctor who killed two wives and a girlfriend, and left no evidence at all.

Auhl will stick with these cases until justice is done. One way or another.

Praise For Under the Cold Bright Lights…

Praise for Under the Cold Bright Lights

“A beautifully written, complex, and character-driven standalone police procedural set in Victoria, Australia . . . as much a morality play as it is a mystery novel, and it's this humanity that pulls it to the top of the genre.”
—Mystery Scene

“A sharp cold-case police procedural with plenty to intrigue the reader . . . Disher’s mastery of plot lines can only be described as consummate thriller writing.”
—NB Magazine

“Garry Disher is a master of understated and clear prose.”
—Deadly Pleasures

“Disher has created a wonderful, believable character in Alan Auhl. His innate kindness and investigative instincts interact in intriguing ways . . . Disher flawlessly combines the many storylines into a twisty final product that will surprise even the savviest of readers. And underlining it all, the Melbourne setting and the oddball cast of house residents make for an entertaining backdrop to the curious crimes.”
—Shelf Awareness

“In any novel by old pro Disher (Port Vila Blues), the characters have substance, the plots are strong, the action is credible and swift. This outstanding work will appeal to all ­detective-o-philes.”
—Library Journal, Starred Review

“Beautifully written . . . the focus on such crimes as child abuse and religious scamming serves to show how justice is rarely gotten through institutional means.”
—Publishers Weekly

“The cases are interesting enough, but what lends above-average texture and interest is Auhl himself . . . A bighearted brooder who’s been part of the justice system long enough to see many instances of justice unserved, Auhl may just be primed to tackle things on his own. As always, Disher writes with clear eyes and a sure hand. Strongly recommended.”
—Booklist

“Disher’s characters, as always, pop from the page . . . don’t you dare miss it.”
—New York Journal of Books

“Sometimes you know whodunit, sometimes you don't, but you always get the pleasure of watching how [Alan] Auhl handles each one. Alan knows what evil can show itself under the glare of cold, bright lights, and he is not afraid . . . Read this book and savor it.”
—Kittling Books

“Top-notch . . . Trust me, mate: Readers will want to make a return visit to Disher’s Australia.”
—The Christian Science Monitor

"Disher has drawn both a vivid and visceral picture of a backblocks bush town, its inhabitants ground down by the stresses of isolation, hard work and irregular, relentlessly shrinking incomes . . . The story pulls no punches."
—The Guardian

Garry Disher has published over fifty books in a range of genres, including crime, children’s books, and Australian history. His Hal Challis and Wyatt crime series are also published by Soho Crime. He lives on the Mornington Peninsula, southeast of Melbourne
Loading...
or
Not Currently Available for Direct Purchase