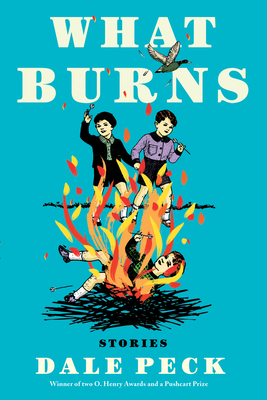 The first collection of short fiction from Lambda Award–winning novelist Dale Peck spans twenty-five years of writing, including two O. Henry award-winners and the recipient of a Pushcart Prize.

The stories in What Burns examine the extremes of desire against a backdrop of family, class, and mortality.

In “Bliss,” a young man befriends the convicted felon who murdered his mother when he was only a child. In “Not Even Camping Is Like Camping Anymore,” a teenage boy fends off the advances of a five-year-old his mother babysits. And in “Dues,” a man discovers that everything he owns is borrowed from someone else—including his time on earth.

Walking the tightrope between tenderness and violence that has defined Peck’s work since the publication of his first novel, Martin and John, through his most recent, Night Soil, What Burns reveals Peck’s mastery of the short form.

Praise For What Burns…

Praise for What Burns

The Millions Most Anticipated Books of Fall 2019

“Peck has often been slotted as a descendent of American post-Stonewall gay writers like Edmund White, Larry Kramer and Andrew Holleran. But Peck is just as much the keeper of the flame of the precision postmodernists like William H. Gass, another Midwesterner who had a way with metaphor and a burning fury against politesse . . . If [Peck is] determined to unsettle, he’s also determined to find the most precise verbiage with which to do it.”
—The Washington Post

“[What Burns] explores some of life's darker corners in eight well-crafted tales written over the past 20 years . . . In each tale, there's some element that induces unease, and there's often an air of menace lurking over the characters. Peck nudges that quality of strangeness to the foreground, even though all of the stories are contemporary and feel firmly grounded in reality.”
—Shelf Awareness

“Stories like these find Peck in fine, counterintuitive form, spinning fiction from the most unlikely and captivating premises.”
—Kirkus Reviews

“Peck is a brave, bold writer who disallows a safe, predictable reading experience. The final line of a story often cracks it open in unanticipated ways.”
—Booklist

“Peck writes beautifully about all types of desires people encounter . . . This is an evocative collection.”
—Publishers Weekly

"You'd think it has been done before but it really hasn't—the perfectly crafted, haunting and heartbreaking, raw, funny, unblinking yet merciful art novel."
—Marlon James

"Night Soil is a novel about art, genius, capitalism, and the uncomfortable, full of the pleasures of the unbeautiful and the broken, from the only genius I know who could write it and live. An incisive, shrewd meditation on just what marks the limits of the human heart, and why."
—Alexander Chee

“An astonishing work of emotional wisdom . . . Peck has galvanized his reputation as one of the most eloquent voices of his generation.”
—The New York Times

“The prose is so unobtrusively graceful that it may take you a while to notice how beautiful it is . . . Peck is as piercing on old age as on youth, as comfortable writing about women’s bodies as about men’s.”
—The New Yorker

“Few writers have Dale Peck’s nerve. He writes without secrets, packing his novels with the intimacies of his life, his family, his sexuality . . . There is an extraordinary sense of the risk and adventure of writing in every page of this novel.”
—The Nation

Dale Peck is the author of fourteen books in a variety of genres, including Visions and Revisions, Martin and John, Hatchet Jobs, and Sprout. His fiction and criticism have appeared in dozens of publications, and have earned him two O. Henry Awards, a Pushcart Prize, a Lambda Literary Award, and a John Simon Guggenheim Memorial Fellowship. He lives in New York City, where he has taught in the New School’s Graduate Writing Program since 1999.
Loading...
or
Not Currently Available for Direct Purchase