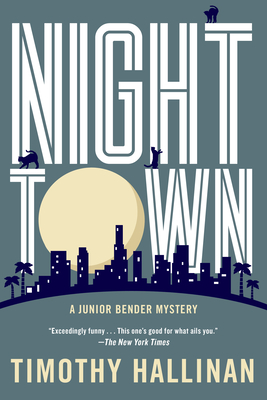 Reluctant P.I. to the perfidious, Junior Bender, may be L.A.’s smoothest operator but when he breaks one of the cardinal rules of burglary (don’t take scores that you’re being paid way too much for) he finds himself once again on the wrong side of, well, the wrong side.

Los Angeles burglar Junior Bender has a rule about never taking a job that pays too well: in the criminal underworld, if you’re offered more money than a job is worth, someone is going to end up dead. But he’s bending his rule this one time because he and his girlfriend, Ronnie, are in desperate need of cash to hire a kidnapper to snatch Ronnie’s two-year-old son back from her ex. The whole thing is pretty complicated and has Junior on edge.

The parameters of the job do nothing to calm his nerves. A nameless woman in an orange wig has offered Junior fifty grand—twenty-five up front—to break into the abandoned house of a recently deceased 97-year-old recluse, Daisy Horton, and steal a doll from her collection. Junior knows no doll is worth 50K, so he figures there must be something hidden inside the doll that can get him in a heap of trouble. It doesn’t take long for Junior to realize he’s not the only one looking for the doll. When an old friend ends up murdered, Junior decides he will stop at nothing to figure out who the woman in the orange wig is, and why she wants the doll badly enough to leave a trail of bodies in her wake.

Timothy Hallinan has been nominated for the Edgar, Nero, Shamus, Macavity, and Silver Dagger awards. He is the author of twenty-two widely praised books, including the Poke Rafferty Bangkok thrillers, most recently Fools’ River, and the Junior Bender Hollywood burglar mysteries, including Herbie’s Game, winner of the Lefty Award for Best Humorous Mystery. After years of working in the television and music industries, he now writes full-time. He lives in California and Thailand.

"If you enjoy the ironic wit and criminal adventures of Lawrence Block’s Bernie Rhodenbarr, then you’ll want to read Timothy Hallinan’s Nighttown. Junior Bender is one of my favorite fictional felons and Hallinan is a writer with the kind of heart and healthy cynicism that I admire."
—Carole E. Barrowman, the Milwaukee Journal-Sentinel

“Nothing puts a smile on my face or chuckle in my heart like a new Junior Bender book. Always fresh and ever insightful, Hallinan delivers pleasure reading in its purest form.”
—Tim Tigner, author of Pushing Brilliance

"[Nighttown] packs an unexpected wallop, which resonates long after the last (and highly satisfying) sentence is read."
—Bookreporter.com

"A not-to-miss mystery . . . Hallinan is easily one of the most entertaining crime writers in the business today."
—New York Journal of Books

"Are you a fan of Donald Westlake's caper books, or the first series from Bethany Maines with its side-splitting moments among makeup experts who ride on the wild side? Here's what you've been waiting for: exquisitely plotted action and twists, with conversation and commentary so dryly funny that those pee-proof panties advertised on TV should be sold with the book in some regions."
—Kingdom Books

"This novel was extremely intriguing, suspenseful, and mysterious. It is highly recommended reading."
—The Gumshoe Review

"Humor is a hallmark of the Junior Bender series, and this latest title is no exception."
—Bookgasm

Praise for Fields Where They Lay

“West Coast fun for the noir at heart.”
—Sunday Times

“Comparisons to Raymond Chandler and Donald Westlake are totally deserved and should give you a clue as to whether you’ll like this book as much as I did.”
—Raleigh News & Observer

“Nobody does comic mystery with an edge better than Hallinan.”
—Booklist, Starred Review
or support indie stores by buying on
Copyright © 2020 American Booksellers Association