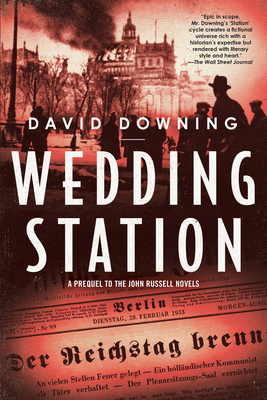 The prequel to David Downing’s bestselling Station series introduces John Russell, an Englishman with a political past who must keep his head down as the Nazis solidify their power.

February 27, 1933. In this stunning prequel to the John Russell espionage novels, the Reichstag parliament building in Berlin is set ablaze. It’s just a month after Hitler’s inauguration as Chancellor of Germany, and the Nazis use the torching to justify a campaign of terror against their political opponents. John Russell’s recent separation from his wife threatens his right to reside in Germany and any meaningful relationship with his six-year-old son, Paul. He has just secured work as a crime reporter for a Berlin newspaper, and the crimes which he has to report—the gruesome murder of a rent boy, the hit-and-run death of a professional genealogist, the suspicious disappearance of a Nazi-supporting celebrity fortune-teller—are increasingly entangled in the wider nightmare engulfing Germany.

Each new investigation carries the risk of Russell’s falling foul of the authorities, at a time when the rule of law has completely vanished, and the Nazis are running scores of pop-up detention centers, complete with torture chambers, in every corner of Berlin.

“Tensely satisfying . . . Downing excels at dramatizing the anxiety and dread pervading a society whose civil liberties are being daily eroded.”
—Tom Nolan, The Wall Street Journal

“[Downing's] Station series, six titles before Wedding Station, evoke the relentless terror of life in Berlin during World War II. Now, in a fierce and daring prequel, Downing reveals the back story to the propulsive series . . . An ideal choice for both Downing fans and newcomers.”
—New York Journal of Books

“A litany of sordid crimes that are both a MacGuffin for and a window into a chilling, compelling era.”
—Kirkus Reviews

Praise for the John Russell Thrillers

"Downing adroitly elucidates the morass that was post-World War II geopolitics without dumbing it down . . . One can only marvel at his talent for infusing such a rangy cast of characters with nuance and soul."
—The New York Times Book Review

"A beautifully crafted and compelling thriller with a heart-stopping ending as John Russell learns the personal faces of good and evil. An unforgettable read."
─Charles Todd, author of the Inspector Ian Rutledge Series

"Downing is one of a trio of exceptional writers (Philip Kerr and Alan Furst being the other two) who have managed to re-create a time and place when much of the world seemed to have gone temporarily mad."
—The Denver Post

"There's nothing better than a well-written WWII thriller. Alan Furst continues to prove it, and now Downing has shown he can produce that creepy sense of paranoia along with the best of them."
—Rocky Mountain News

David Downing grew up in suburban London. He is the author of seven books in the John Russell “Station” series, set in WWII Berlin, as well as four WWI espionage novels in the Jack McColl series and the thrillers Diary of a Dead Man on Leave and The Red Eagles. He lives with his wife, an American acupuncturist, in Guildford, England.
Loading...
or support indie stores by buying on