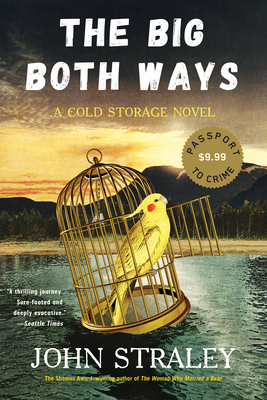 The Big Both Ways (A Cold Storage Novel #1)

Alaska, 1935: Slippery Wilson is on his way out of town when he runs into a woman, her neice, and a crashed car. His life is about to get a lot more complicated.

It's 1935 and jobs are scarce, but Slippery Wilson walks off his job at a logging camp after a gruesome accident kills a coworker. He's headed for Seattle with all his savings; he plans to buy a piece of farmland and be his own boss.

When he stops to help a woman get her car out of a ditch, his life takes a serious detour. The woman is Ellie Hobbs, an anarchist from the docks of Seattle who watches out for her young niece and dreams of flying planes. But right now, she's got one busted nose and has just stuffed a dead man's body into the trunk of her car. So begins the action that will take Slip, Ellie, her niece, and her noisy yellow bird on a heart-stopping adventure up the Inside Passage from Puget Sound to Alaska

Praise For The Big Both Ways (A Cold Storage Novel #1)…

Praise for The Big Both Ways

"Straley hits all the right notes here: vividly detailed scenes evoking the clash between emerging trade unions and more radical advocates of revolution, as well as almost Dickensian vignettes of the working conditions in the canneries and on the waterfronts of the Northwest, meld perfectly with a Jack London–like, man-versus-nature story in which two adults, one child, and one bird, huddled together in a very small boat, attempt to stay afloat and move ever northward.”
—Booklist, Starred Review

"Chandler, Ross Macdonald, James Crumley . . . Straley proves once again that he is up there with the great ones . . . His prose is as smooth as a well-tuned cello. He has tremendous feeling for the setting: not only the open waters and frosted countryside outside of Sitka and Juneau, but also the somewhat seedy streets of these cities."
—Chicago Tribune

"Now and then a writer dares to flout the rules and in so doing, carves out a niche that belongs to him alone. John Straley's novels are like no others."
—San Diego Tribune

"Outstanding . . . satisfies on all levels."
—The Kansas City Star

"Strong and sobering . . . with his storyteller's sense of dramatic action [Straley's] in his glory."
—The New York Times Book Review