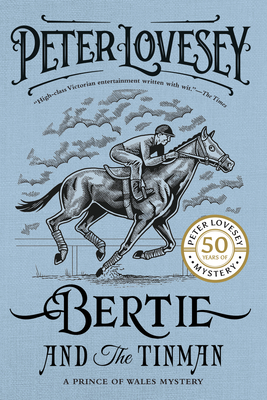 Bertie and the Tinman (A Prince of Wales Mystery #1)

Introducing Victorian England’s most illustrious amateur sleuth (if not necessarily its most adept): Bertie, Prince of Wales, who can’t help but poke his royal nose into a suspicious-sounding circumstance.

Bertie, Prince of Wales and future King Edward VII, is a charismatic but self-indulgent man who enjoys the finer things in life, including dining, flirting, and flitting from party to party with his entire thirty-person staff in tow. But the fun and games come to a tragic halt when Bertie hears the shocking news that his friend the legendary jockey Fred Archer, known as the Tinman, has taken his own life. Bertie has his doubts that it was in fact suicide, especially considering the Tinman's ominous final words: “Are they coming?” Bertie resolves to discover the truth, looking for new suspects and evidence on a quest that will take him through some of the most disreputable parts of London, much to the dismay of his mother, Queen Victoria.

Praise for Bertie and the Tinman

“Lovesey proved himself the world’s foremost concocter of latter-day Victoriana in his series of mysteries built around Sergeant Cribb . . . The rueful, candid voice he gives to the fleshy prince rings true, the details of the horse-racing and music-hall worlds are vivid, and much of the tale is sweetly funny.”
—Time

“One doesn’t wish to put that nice Sergeant Cribb out of a job: but we can’t wait to go out on another case with dear Bertie.”
—Philadelphia Inquirer

"A hugely entertaining racing thriller . . . with a mixture of royal cunning and Flashman-style caddishness. It's Dick Francis by gaslight."
—Daily Express

Peter Lovesey is the author of more than thirty highly praised mystery novels. He has been named a Grand Master by the Mystery Writers of America and has been awarded the CWA Gold and Silver Daggers, the Cartier Diamond Dagger for Lifetime Achievement, the Strand Magazine Award for Lifetime Achievement, the Macavity, Barry, and Anthony Awards, and many other honors. He lives in Shrewsbury, England.
Loading...
or
Not Currently Available for Direct Purchase