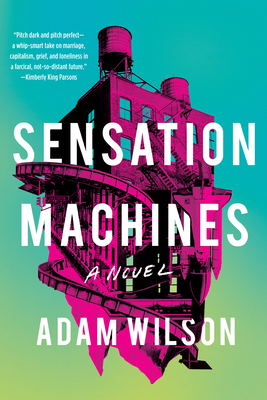 A razor-sharp, darkly funny, and deeply human rendering of a Post-Trump America in economic free fall

Michael and Wendy Mixner are a Brooklyn-based couple whose marriage is failing in the wake of a personal tragedy. Michael, a Wall Street trader, is meanwhile keeping a secret: he lost the couple’s life savings when a tanking economy caused a major market crash. And Wendy, a digital marketing strategist, has been hired onto a data-mining project of epic scale, whose mysterious creator has ambitions to solve a national crisis of mass unemployment and reshape America’s social and political landscapes. When Michael’s best friend is murdered, the evidence leads back to Wendy’s client, setting off a dangerous chain of events that will profoundly change the couple—and the country.

Set in an economic dystopia that’s just around the corner, Sensation Machines is both an endlessly twisty novel of big ideas, and a brilliantly observed human drama that grapples with greed, automation, universal basic income, wearable tech, revolutionary desires, and a broken justice system. Adam Wilson implicates not only the powerbrokers gaming the system and getting rich at the intersection of Wall Street, Madison Avenue, Silicon Valley, and Capitol Hill, but all of us: each one of us playing our parts, however willingly or unwillingly, in the vast systems that define and control our lives.

“Reads a little bit like Tom Wolfe in a futurist dystopia. There are full-throated riffs on materialism and tech surveillance, on simulation video gaming, white privilege and the lyrics of Eminem. A spirit of exhilaration fires the book’s best moments. We may be going to hell, but at least it’s fun to rant about.”
—The Wall Street Journal

“A witty, incisive commentary on the fallout from a generation betrayed by the promise of the American dream that, it turns out, masked a foundation of greed, broken social structures, and the topsy-turvy values of capitalism first.”
—The Daily Beast

“Brilliant . . . Peel [it] one away, and it’s a paranoid near-future thriller with a deep swirl of dark humor circling around it . . . Wilson is a stylist with few contemporaries.”
—Inside Hook

“Sensation Machines might be set in the near future, but the concerns that fuel its plot—systemic racism, economic anxiety, and corporatist entities looking to sink laws that could lead to real change—feel decidedly relevant in 2020 . . . The characters are grappling for a better life; they’re also trying hard to keep their souls intact. And in the not-so-distant future, pulling that last one off is even harder than it is today.”
—Tor.com

“Despite the book’s current relevance, Sensation Machines could have also been published a decade ago, alongside post-Great Recession, New York novels like Gary Shteyngart’s Super Sad True Love Story and Sam Lipsyte’s The Ask, which engage in similar humorous yet sad searches for the heart of a thoroughly mediated world . . . Yet Wilson’s various gadgets are secondary to more lasting concerns of love, grief, inequality, and uncertainty. Wilson wants to believe that human connection, though refracted by capitalism, branding, crises, and augmented reality visors, has not been degraded, that it is not a thing of the nostalgic past or the utopian future but a constant possibility, if we can just stop playing characters in someone else’s game long enough to create it."
—Full Stop

“For a book set in the near-future, Sensation Machines feels pretty damn current. Social upheaval, antisemitism and class wars swirl in the background of the high-intensity novel.”
—Hey Alma

"With remarkable grace and wit, Adam Wilson puts the stethoscope to our national heart and diagnoses our deepest ills."
—Alexandra Kleeman, author of You Too Can Have a Body Like Mine and Intimations

"Adam Wilson is a prose savant, and Sensation Machines is a not-so-small miracle. With its precise details about our current moment, profusion of voice and sound, Wilson's new novel brings to mind everyone from Saul Bellow to Paul Beatty, Grace Paley to Zadie Smith. But his ideas and his syntax and his humor are entirely his. This is a great book by one of our funniest smartest sharpest contemporary novelists."
—Daniel Torday, author of The Last Flight of Poxl West and Boomer 1

"Sensation Machines is precision-engineered to entertain, enlighten, and unsettle. Adam Wilson is a master craftsman with a globe-sized heart."
—Joshua Cohen, author of Book of Numbers

"Sensation Machines is part techno-political thriller, part social satire, and part family drama, and it succeeds wonderfully on all fronts. The book is smart, funny, and fast-paced, with lots to say about the mess we're in, but the thing that has stayed with me is its heart. Adam Wilson exemplifies that old Pynchonian dictum: Keep cool, but care."
—Christopher Beha, author of The Index of Self-Destructive Acts

"Wilson’s observations are often sharp-witted, extracting humor from sources like video game addiction, cryptocurrency, and herd mentality . . . as Michael and Wendy’s marriage fractures, the author carefully braids their individual narratives to a satisfying, if inevitable, crescendo. This feels all too real."
—Publisher's Weekly

"[A] biting comedy of a post-Trump America . . . A murder, next-gen tech, videogame addiction and every kind of illegal drug figure into Wilson's lulu of a plot, but the pleasure here is the sharpness of Wilson's prose, his observant satire and the richly evocative feelings of loss."
—Shelf Awareness

"A delayed bildungsroman for a whole generation . . . It draws upon Occupy Wall Street, criticisms of neoliberalism, the affronts represented by the presidency of Donald Trump, and New York cultural mainstays . . . As its earnest leads laud fairness but establish themselves as the greatest impediments to progress, Sensation Machines nods to the adage that, the more circumstances change, the more they stay the same."
—Foreword Reviews

"Adam Wilson’s new novel is the first entry in a genre we might soon call ‘American pre-topianism’ . . . There’s grappling with internalized misogyny, hedge funds collapsing, treatises on Eminem, and oodles of invasive technology, and at the center of it all are Michael, Wendy, and a murder that might upend the whole country’s order. If each generation has a defining emotional bearing, like Gen X’s stranglehold on apathy, and the Boomers’ late-stage lurch from idealism into me-me Zen selfishness, Wilson posits the Elder Millennials (the Oregon Trail Generation) are perhaps defined by a strange sort of grief—an unshakable hope in the hopeless. It’s the kind of book that’s hyper of-the-times in order to understand recent history, and Sensation Machines understands America so well it’s almost mean."
—Chris Lee, Boswell Book Company, Milwaukee, WI

Adam Wilson is the author of the novel Flatscreen, which was an Indie Next Pick and a National Jewish Book Award Finalist, as well as the short story collection What's Important Is Feeling. His is the recipient of The Paris Review’s Terry Southern Prize for Humor, and his work has appeared in Harper’s, Tin House, The Paris Review, and The Best American Short Stories, among other publications. Wilson has taught in the creative writing programs at Columbia and NYU. He lives in Brooklyn with his wife and son.
Loading...
or support indie stores by buying on