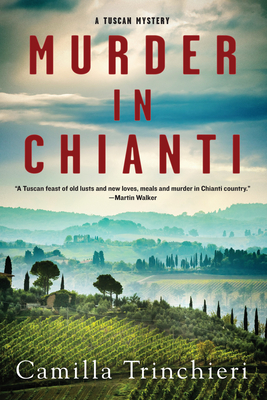 Set in the heart of Tuscan wine country, Camilla Trinchieri's new mystery introduces Nico Doyle, a former NYPD homicide detective who's just looking for space to grieve when he finds himself pulled into a local murder investigation.

Mourning the loss of his wife, Rita, former NYPD homicide detective Nico Doyle moves to her hometown of Gravigna in the wine-soaked region of Chianti. Half-Italian and half-Irish, Nico finds himself able to get by in the region with the help of Rita’s relatives, but he still feels alone and out of place. He isn’t sure if it’s peace he’s seeking, but it isn’t what he finds. Early one morning, he hears a gunshot near his cabin and walks out to discover a dead body in the woods, flashily dressed in gold tennis shoes. A small white dog at the scene won’t leave Nico alone, so he lies to the police and claims to be its owner.

Salvatore Perillo, the local maresciallo, enlists Nico’s help with the murder case. It turns out more than one person in this idyllic corner of Italy knew the victim, and with a very small pool of suspects, including his own in-laws, Nico must dig up Gravigna’s every last painful secret to get to the truth.

Camilla Trinchieri worked for many years dubbing films in Rome with directors including Federico Fellini, Pietro Germi, Franco Rosi, Lina Wertmüller and Luchino Visconti. She immigrated to the US in 1980 and received her MFA in Creative Writing from Columbia University. Under the pseudonym Camilla Crespi, she has published seven mysteries, as well as The Breakfast Club Murder. As Camilla Trinchieri, she has published The Price of Silence and Seeking Alice, a fictionalized account of her mother's life in Europe during WWII that won an Italian American Studies Association Award. Both have also been published in Italian, along with What Really Happened to Billy.

Praise For Murder in Chianti…

“A suspenseful and moving family drama that will leave you wondering where the truth lies.”
—Harlan Coben, New York Times bestselling author of The Woods

“A chilling and memorable tale of hearts in turmoil, rendered with grace and intensity by an author who understands secrets and the devastation they can wreak.”
—Richmond Times-Dispatch
or
Pre-Order Now
Copyright © 2020 American Booksellers Association