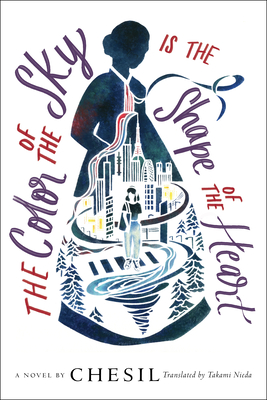 The Color of the Sky Is the Shape of the Heart

Now in translation for the first time, the award-winning debut that broke literary ground in Japan explores diaspora, prejudice, and the complexities of a teen girl’s experience growing up as a Zainichi Korean, reminiscent of Min Jin Lee's classic Pachinko and Sandra Cisneros’s The House on Mango Street.

Seventeen-year-old Ginny Park is about to get expelled from high school—again. Stephanie, the picture book author who took Ginny into her Oregon home after she was kicked out of school in Hawaii, isn’t upset; she only wants to know why. But Ginny has always been in-between. She can't bring herself to open up to anyone about her past, or about what prompted her to flee her native Japan. Then, Ginny finds a mysterious scrawl among Stephanie's scraps of paper and storybook drawings that changes everything: The sky is about to fall. Where do you go?

Ginny sets off on the road in search of an answer, with only her journal as a confidante. In witty and brutally honest vignettes, and interspersed with old letters from her expatriated family in North Korea, Ginny recounts her adolescence growing up Zainichi, an ethnic Korean born in Japan, and the incident that forced her to leave years prior. Inspired by her own childhood, author Chesil creates a portrait of a girl who has been fighting alone against barriers of prejudice, nationality, and injustice all her life—and one searching for a place to belong.

“Most novels are born from an illusory sense of security that a monolingual and monoethnic Japan exists. This novel is fraught with a tension that only those who live with the threat of violence can know.”
—Yoko Tawada, author of The Emissary, Winner of the National Book Award for Translated Literature

Chesil is a third-generation Korean born in Japan. She attended film school to study acting until she discovered a new passion for writing. She decided to mark the end of her twenties by writing a novel inspired by events during her childhood. That novel became her debut book. In 2016, she received the Gunzo New Writer's Prize and was nominated for the Akutagawa Prize. In 2017, she won the Oda Sakunosuke Prize as well as the Ministry of Education's Fine Art Award for a Debut Work.


Takami Nieda has translated more than ten works from Japanese into English and has received numerous grants in support of her translations, including the PEN/Heim Translation Fund for the translation of Kazuki Kaneshiro's GO. She teaches writing and translation at Seattle Central College in Washington State.
Loading...
or support indie stores by buying on