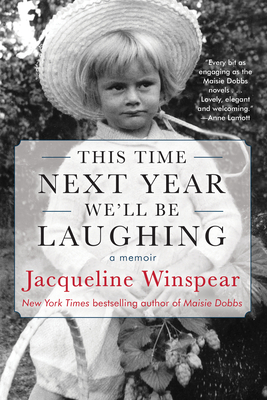 This Time Next Year We'll Be Laughing

“As a fan of her Maisie Dobbs novels, I couldn’t wait to learn more about Jacqueline Winspear herself. This memoir takes the reader through the early and adolescent years of the author’s life as well as the history of her parents. Winspear’s memoir of an English country childhood is also a love letter to her parents, whose choices and outlook shaped her life. She paints a vivid picture of postwar England, and her story is engaging, vivid, and hopeful.”
— Scott Lange, The Bookman, Grand Haven, MI
View the List

“Jacqueline Winspear has created a memoir of her English childhood that is every bit as engaging as her Maisie Dobbs novels, just as rich in character and detail, history and humanity. Her writing is lovely, elegant and welcoming.”—Anne Lamott

The New York Times bestselling author of the Maisie Dobbs series offers a deeply personal memoir of her family’s resilience in the face of war and privation.

After sixteen novels, Jacqueline Winspear has taken the bold step of turning to memoir, revealing the hardships and joys of her family history. Both shockingly frank and deftly restrained, her story tackles the difficult, poignant, and fascinating family accounts of her paternal grandfather’s shellshock; her mother’s evacuation from London during the Blitz; her soft-spoken animal-loving father’s torturous assignment to an explosives team during WWII; her parents’ years living with Romany Gypsies; and Winspear’s own childhood picking hops and fruit on farms in rural Kent, capturing her ties to the land and her dream of being a writer at its very inception.

An eye-opening and heartfelt portrayal of a post-War England we rarely see, This Time Next Year We’ll Be Laughing chronicles a childhood in the English countryside, of working class indomitability and family secrets, of artistic inspiration and the price of memory.

Praise For This Time Next Year We'll Be Laughing…

Praise for This Time Next Year We'll Be Laughing

“The author of the Maisie Dobbs series of cozy British mysteries picked hops as a young girl to help support her family, which struggled to subsist in the hardscrabble landscape of rural Kent. This childhood memoir, though frank in its details of postwar privation, is at heart a love story—her parents’ love for each other, and hers for them and the meaningful life they gave her.”
—The Wall Street Journal

“The best-selling author of the Maisie Dobbs mystery series pulls back the curtain on her hardscrabble postwar childhood in rural Kent, England, in which bitter poverty was offset by good cheer and family love.”
—The New York Times

“I fell in love with Jackie Winspear almost at once, right there on Page 24 of her engaging, amusing and moving memoir of growing up in the post-World War II English countryside . . . You don’t have to be a boomer or have had a mirror experience to get pulled into the world Winspear re-creates. It’s a world both nostalgic and soberly realistic, full of crystalline descriptions of the Kentish countryside and the now long-gone hop gardens that once flourished there.”
—The Washington Post

“The book is heartfelt and humorous, poignant and frank, and — as with the Maisie Dobbs books — beautifully written.”
—Buzzfeed

“A lovely memoir whether you are a fan of Winspear’s Maisie Dobbs mysteries or not. This is her personal account of her English childhood, including the harrowing stories and trauma of the second world war on her grandparents and parents, and her young life living on farms around Kent.”
—Book Riot

“Evocative . . . Walking with her through this complex thicket of rumination and reminiscence offers readers a chance to understand more about the writing process, while revealing details of a family heritage well worth recording.”
—Bookreporter.com

“As we have seen in her Maisie Dobbs series, Winspear's talent as a writer shines in her attention to detail and expert depictions of the emotional impact of war.”
—AudioFile Magazine

“Has there been another title this fitting to the moment released this year? I doubt it . . . An extraordinary story of a childhood that spanned huge changes in society and a family grappling with the world lurching ahead. It was the perfect read for this year.”
—The Secret Library Podcast

“Jacqueline Winspear has created a memoir of her English childhood that is every bit as engaging as her Maisie Dobbs novels, just as rich in character and detail, history and humanity. Her writing is lovely, elegant and welcoming.”
—Anne Lamott, New York Times bestselling author of Almost Everything: Notes on Hope

“Jacqueline Winspear's memoir takes the reader through the early and adolescent years of the author's life as well as the history of her parents' young marriage in a fashion that is simultaneously endearing, touching, amusing, heartfelt, and astonishing . . . It's a love letter and a beautiful work of gratitude toward the people and the place that made the author what and who she is.”
—Elizabeth George, New York Times bestselling author of the Inspector Lynley novels

“A beautifully rendered, elegant work of literary architecture joining the present to the past. Jacqueline Winspear's memoir of an English country childhood is also an homage to the remarkable parents whose choices and outlooks shaped her. Their stories of hardship and gratitude became hers, and hers became this unforgettable book.”
—Hope Edelman, New York Times bestselling author of Motherless Daughters and The Aftergrief

“This is a memoir both evocative and unflinching. Without a trace of self-pity, Jacqueline Winspear portrays a childhood of rural poverty overcome by hard manual labor, lifelong love amid emotional wounds, and a profound understanding of how 'the gift of place' creates meaning . . . An illuminating portrait of a time and place that is as optimistic as it is deeply moving.”
—Sally Bedell Smith, author of Prince Charles: The Passions and Paradoxes of an Improbable Life

“[Winspear's] words are hopeful and bright, and imbued with a resilience that will resonate with readers . . . The book will appeal well beyond Winspear’s fan base as a literary memoir deeply linked to history and as a meditation on place and family.”
—Library Journal, Starred Review

“[Winspear] draws distinctive portraits of postwar England, altogether different from the U.S., where she has since settled, and her unsettling struggles within the rigid British class system. An engaging childhood memoir and a deeply affectionate tribute to the author’s parents.”
—Kirkus Reviews, Starred Review

“Though she was born in 1955, [Winspear] provides a visceral portrait of London during WWII and the hardships and cultural changes that shaped England in the decades that followed . . . [An] elegantly executed memoir.”
—Publishers Weekly

“Compelling . . . powerful. [Maisie Dobbs] testifies to the enduring allure of the traditional mystery . . . even though I knew what was coming this second time 'round, its final scene is still a punch in the gut.”
—Maureen Corrigan for NPR’s Fresh Air

"[A] deft debut novel . . . Romantic readers sensing a story-within-a-story won't be disappointed. But first they must be prepared to be astonished at the sensitivity and wisdom with which Maisie resolves her first professional assignment."
—The New York Times

"The reader familiar with Alexander McCall Smith's The No. 1 Ladies Detective Agency . . . might think of Maisie Dobbs as its British counterpart . . . [Winspear] has created a winning character about whom readers will want to read more."
—Associated Press

"[Maisie Dobbs] catches the sorrow of a lost generation in the character of one exceptional woman."
—Chicago Tribune

"One of the best and most influential crime novels of the young century."
—Ellery Queen Mystery Magazine

“The book is much more than a cosy mystery—it is also about women's growing emancipation and the profound changes to society after the First World War.”
—Mail on Sunday

Jacqueline Winspear was born and raised in Kent, England. After graduating from the University of London’s Institute of Education, she worked in academic publishing, higher education, and marketing communications. She emigrated to the United States in 1990. She has written fifteen novels in the New York Times bestselling Maisie Dobbs series, which has won numerous awards, including the Agatha, Macavity, and Alex. Her standalone novel about the Great War, The Care and Management of Lies, was a finalist for the Dayton Literary Peace Prize. She lives in California.
Loading...
or support indie stores by buying on