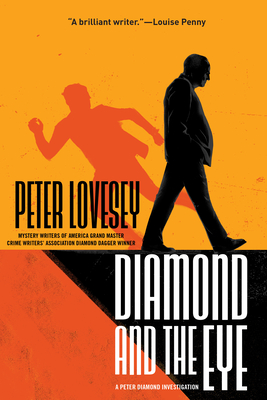 Diamond and the Eye (A Detective Peter Diamond Mystery #20)

A Bath antiques dealer has disappeared, and detective Peter Diamond has been saddled with the "help" of a hardboiled Philip Marlowe wannabe private investigator in cracking the case. MWA Grand Master Peter Lovesey's 20th installment in the award-winning series will have readers laughing from the first page.

If there's one thing detective Bath Peter Diamond has no patience for, it's a dumb git trying to get involved in one of his investigations—for example, a Philip Marlowe-wannabee private investigator like the self-styled Johnny Getz (his card claims he Getz results). But fate has saddled Diamond with this trial. A Bath antiques dealer, Septimus "Seppy" Hubbard, has disappeared without a trace, and his daughter, Ruby, has hired Johnny Getz to find him. When a dead body is discovered in Seppy's locked-up store, the missing persons case becomes a murder investigation, and now Diamond has to collaborate with the insufferable private eye.

Praise for Diamond and the Eye

“Longtime PI buffs will take a shine to the dodgy Getz’s wannabe ambitions, and procedural buffs should enjoy how Diamond and company work the case. It’s the mutual aggravation society of the two mismatched sleuths, however, that really has me itching for a rematch.”
—Kevin Burton Smith, Mystery Scene Magazine

“Lovesey writes [a] feel-good crime yet he never lets the comedy vitiate the mystery.”
—The Times Saturday Review

“Glory be! British crime novelist Lovesey is back, bringing along his beloved series hero, the grumpy, darkly funny, and—beneath it all—strictly business Peter Diamond, detective inspector with the Bath constabulary. It's all here: mystery, sparky writing, and a cast of characters who come alive on the page, moving through a tricky plot that we know is playing us for suckers.”
—Booklist, Starred Review

“The action builds to a Poirot-like solution.”
­—Publishers Weekly

“Move over, Detective Superintendent Peter Diamond. The Avon and Somerset CID is about to be joined, jostled, and decentered by two other parties interested in an otherwise ordinary burglary.”
—Kirkus Reviews

“[Lovesey] has created a brisk, colorful page-turner centered on murder and mayhem at the springtime half-marathon in the city of Bath.”
—The Pittsburgh Post-Gazette

“A particularly crafty resolution of the enigmatic mystery shows that this long-running series still has plenty of life.”
—Publishers Weekly, Starred Review

Peter Lovesey is the author of more than forty highly praised mystery novels. He has been named a Grand Master by the Mystery Writers of America and has been awarded the CWA Gold and Silver Daggers, the Cartier Diamond Dagger for Lifetime Achievement, the Strand Magazine Award for Lifetime Achievement, the Macavity, Barry, and Anthony Awards, and many other honors. He lives in Shrewsbury, England.
Loading...
or support indie stores by buying on