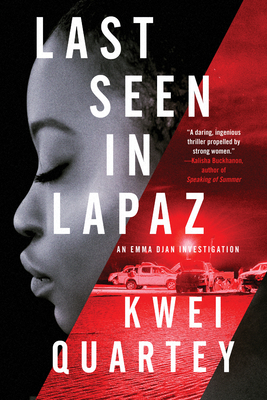 When a whirlwind romance leads to a brutal murder and the disappearance of a young Nigerian woman, PI Emma Djan resorts to dangerous undercover work to track her down in Accra.

Just as things at work are slowing down for PI Emma Djan, an old friend of her boss’s asks for help locating his missing daughter. According to her father, Ngozi had a bright future ahead of her when she became secretive and withdrawn. Suddenly, all she wanted to do was be with her handsome new beau, Femi, instead of attending law school in the fall. So when she disappears from her parents’ house in Nigeria the middle of a summer night, they immediately suspect Femi was behind it and have reason to believe the pair has fled to Accra.

During Emma’s first week on the case, Femi is found murdered at his opulent residence in Accra. There are no signs of Ngozi at the scene, and fearing the worst, Emma digs further, discovering that Femi was part of a network of sex traffickers across West Africa.

Emma must figure out which of Femi’s many enemies killed him, but more urgently, she must find Ngozi before she, too, is murdered in cold blood.

Praise For Last Seen in Lapaz (An Emma Djan Investigation #3)…

Praise for Last Seen in Lapaz

“Last Seen in Lapaz is a murder mystery you won’t be able to put down.”
—Brittle Paper

“From Lagos to Ghana, and through the Sahara to Libya, Last Seen in Lapaz is a story that is as gripping as it is important.”
—Leye Adenle, author of Easy Motion Tourist

“Quartey once again finds piercing social pain beneath what looks like a routine case.”
—Kirkus Reviews

“Well-defined characters complement the clever narrative structure, and dialogue in West African pidgin dialect (for which a glossary is provided) adds realism. Not just those looking for a detailed picture of modern West African life, the book’s main strength, will be rewarded.”
—Publishers Weekly

Praise for the Emma Djan Investigations

“The sweetly crafty Emma is the main attraction here, but her colleagues at the Sowah detective agency are also a companionable bunch in this beautifully crafted tale.”
—The Washington Post

“Quartey’s work brings vivid life to his Ghanaian characters and setting, while reminding us that no matter the location, motivations for murder are the same everywhere.”
—CrimeReads

Kwei Quartey was born in Ghana and raised by a Black American mother and a Ghanaian father. A retired physician, he lives in Pasadena. He is the author of five critically acclaimed novels in the Darko Dawson series, as well as two other books in the Emma Djan series, including The Missing American, which was nominated for an Edgar Award for Best Novel. Find him on Twitter@doublekwei and on his website, kweiquartey.com.
Loading...
or support indie stores by buying on