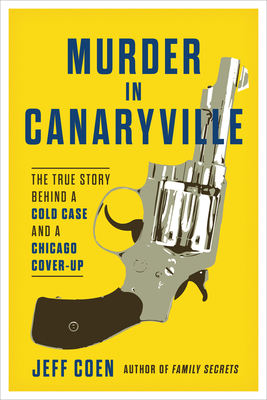 "A real-life crime drama with vivid individuals and neighborhoods.  A murder unsolved until now after forty years. It portrays the unvarnished Chicago of yesterday...absolutely a must read." —Dick Simpson, author of The Good Fight

The cold-case murder of John Hughes, the son of a Chicago Outfit member suspected of pulling the trigger, and the efforts of a determined detective to unravel a cover-up

The grandson and great-grandson of Chicago police officers, Chicago Police Detective James Sherlock was CPD through-and-through. His career had seen its share of twists and turns, from his time working undercover to thwart robberies on Chicago's L trains to his years as a homicide detective. He thought he had seen it all.

But on this day, he was at the records center to see the case file for the murder of John Hughes, who was seventeen years old when he was gunned down on Chicago's Southwest Side in 1976. The case’s threads led everywhere: Police corruption. Hints of the Chicago Outfit. A crooked judge. Even the belief that the cover-up extended to "hizzoner" himself—legendary Chicago mayor Richard J. Daley.

A murder that had roiled the city and had been investigated for years had been reduced to a few reports and photographs. What should have been a massive file with notes and transcripts from dozens of interviews was nowhere to be found. Sherlock could have left the records center without the folder and cruised into retirement, and no one would have noticed.

Instead, he tucked the envelope under his arm and carried it outside.


Praise For Murder in Canaryville: The True Story Behind a Cold Case and a Chicago Cover-Up…

"This tale sheds light on the worlds of Chicago crime and politics and shows the collateral damage both can leave in their wake." —Jerry Springer, host of The Jerry Springer Show and Judge Jerry ​

"Coen pulls back the curtain on a cold case, revealing the city’s underside and offering compelling evidence that a police cover-up, mob influence, and political corruption conspired to hide the truth behind John Hughes’s murder. An engaging true-crime story that reads like a mystery, alive with vivid characters and unexpected twists and turns." —Kevin Davis, author of The Brain Defense and Defending the Damned

"Jeff Coen’s heartbreaking account of the unsolved 1976 murder of a high school senior in a South Side park is like the story of Chicago in miniature. It’s a sad and infuriating story, meticulously reported and so vividly written that it feels like a film." —Mary Wisniewski, author of Algren: A Life

“an exciting book which takes us compellingly back in time and into some of darkest corners of Chicago.” —Chicago Tribune

Jeff Coen is the Chicago Tribune crime and justice editor. He is the author of Family Secrets: The Case That Crippled the Chicago Mob and the coauthor of Golden: How Rod Blagojevich Talked Himself Out of the Governor’s Office and into Prison.