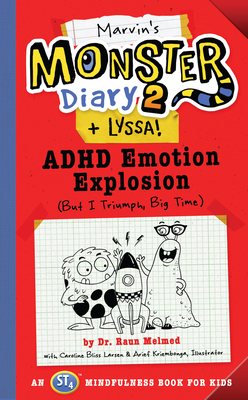 Meet Marvin, a lovable monster with a twelve-stringed baby fang guitar, a rambunctious case of ADHD, emotions that sometimes overwhelm him (and others), and a diary to record it all. While Marvin got it together in Marvin's Monster Diary: ADHD Attacks, his lab partner Lyssa's emotional roller coaster is a bit out of control. Can he help her—and win the Science Scare-Fair—before she explodes?

In the same humorous spirit of Diary of a Wimpy Kid comes Marvin's Monster Diary: ADHD Emotion Explosion Using the "monstercam" and "ST4" techniques developed by Dr. Raun Melmed of the Melmed Center in Arizona, Marvin's Monster Diary: ADHD Emotion Explosion teaches kids how to be mindful, observe their surroundings, and take time to think about their actions. Marvin's hilarious doodles and diary entries chronicle his delightful adventures, misadventures, and eventual triumph in a funny, relatable way. It's the series on ADHD that kids will actually want to read!

Caroline Bliss Larsen edits BYU Independent Study courses by day and writes and edits novels by night. She is also a freelance acquiring editor for Jolly Fish Press and Flux, middle grade and young adult imprints of North Star Editions. She graduated in language, literature, and editing at Brigham Young University. She is the coauthor of Marvin's Monster Diary 2 (+Lyssa!): ADHD Emotion Explosion and Marvin's Monster Diary 3: Trouble with Friends. Originally an East Coast girl, Caroline lives in Utah with her game-designer husband. To clear her head of words from time to time, she likes to Irish dance, play board games, and snuggle her nieces, nephew, husband, and delightfully clingy cat, Cinder. Follow her on most major social media platforms, or visit carolineblisslarsen.com.

Arief Kriembonga graduated from Jakarta Arts Institute, Indonesia. He started his career as a children's and comic book illustrator in 2010. In addition to being an illustrator, Arief also works as a UI/UX and graphic designer. Besides art, his greatest passion is single-origin coffee. He lives with his wife and one beloved daughter in Jakarta, Indonesia.

"I was impressed with the exciting and surprising ending...What a great book for every young reader. This should be in every library, school and home.
—Midwest Book Review/The Story Monsters Ink Shelf
or
Buy Here
Copyright © 2020 American Booksellers Association