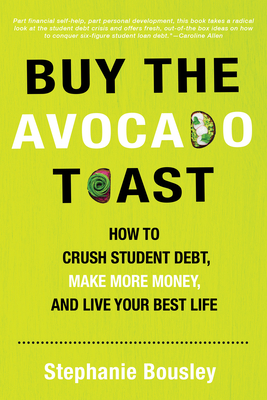 How to Crush Student Debt, Make More Money, and Live Your Best Life

What if the solution to student debt was reinvesting in yourself?

Are you a smart, hard-working person who always seems to struggle financially? Do you ever second-guess decisions to pursue higher education because of your student loans? Has extreme budgeting eliminated joy and comfort from life, yet you’re still several years away from being debt-free?

Conventional wisdom tells us the formula for success is simple: go to school, get a job, work hard, repeat as needed until you retire. It tells us that debt is the result of poor choices and irresponsible spending. Unfortunately, such advice fails to take into account the recent (and not-so-recent) graduates for whom predatory student lending rates have set them back tens or even hundreds of thousands of dollars before they even enter the job market.

In Buy the Avocado Toast, Stephanie Bousley shares lessons learned through years of working hard and perpetually undervaluing herself while coming to terms with owing almost $300,000 in student debt. Through a holistic approach to both net worth and self-worth, Bousley offers readers hope for their own financial situations by providing step-by-step instructions on reducing debt, living better, and rooting out the self-defeating beliefs that keep us broke.

Stephanie Bousley grew up outside St. Paul, Minnesota. In 2001, she earned degrees in international business and psychology from the University of San Francisco, but became increasingly interested in film and music. Upon graduation, she turned down an analyst position at Citibank, opting instead to run music bookings at a nightclub while attending film classes. In 2007, Stephanie decided to focus on filmmaking and apply to graduate school. She was accepted to New York University's Tisch School of the Arts, where she served as Todd Solondz's teaching assistant and earned an MFA in film production.

As part of her thesis completion work, Stephanie produced several of her classmates's films in Singapore, India, Nepal, and the Philippines—living in Singapore during pre-production periods. With student loan balances into the $200ks, Stephanie decided to stay in Singapore rather than return to the US. Eventually, after many different jobs—from nannying to tech start-ups—Stephanie ended up working for one of the world's most successful hedge funds and became the assistant to the CEO. Being surrounded by people earning tens of millions per year (instead of carrying six-figure debt) taught Stephanie a whole new way to think about money.

Stephanie currently resides in Los Angeles, California, where she lives with her dog, Kaia.


Praise For Buy the Avocado Toast: How to Crush Student Debt, Make More Money, and Live Your Best Life…

"Stephanie's book lies at the heart of a central problem in America—and it's not just financial. Millenials are mired in student debt and can't find well-paid jobs that allow them to pay rent and interest on the loans. This has bred mental health problems and an opioid epidemic among those stuck at home who are 21-29. It suppresses the housing market and taxes our mental health system. Something needs to be done. Steph's book is a great start."


This book provides a pathway and great practical approach for many people faced with painful student debt. A true testimonial from someone who has personally lived through this experience."


"Love it. A real book by a real person addressing a real problem in real life. Useful insights on how to have a different perspective on one's real (and perceived) problems. "