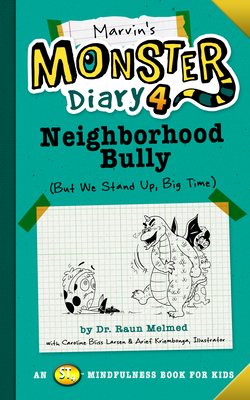 Neighborhood Bully: (But We Stand Up, Big Time!) (Monster Diaries)

It’s the clawsomest time of year: summer vacation! All Marvin and his friends want is to enjoy their turf—the park across the street—and play superheroes to their hearts’ content. But when bullies arise, so does conflict. Suddenly a power struggle erupts over playground dibs. It’s Marvin and his band of Super Scarers versus Drake the Dreadful and his too-cool-for-school henchmen!

But the monsters discover that bullying isn’t always black and white, good guys and bad guys. By using tools such as ST4 and a circular role-playing game, Marvin and his friends discover that defeating bullying doesn’t always mean defeating bullies. In fact, with a little help from your friends, anyone can rise to the occasion. Marvin's hilarious doodles and diary entries chronicle his delightful adventures, misadventures, and eventual triumph in a funny, relatable way. It's the one series on ADHD and associated issues that kids will actually want to read!

Caroline Bliss Larsen is a children’s book author and full-time editor. To clear her head of words from time to time, she likes to Irish dance, play games, and snuggle her nieces, nephew, husband, and delightfully clingy cat.

Arief Kriembonga is a children’s and comic book illustrator,  a UI/UX and graphic designer, and a single-origin coffee connoisseur who lives with his wife and one beloved daughter in Jakarta, Indonesia.